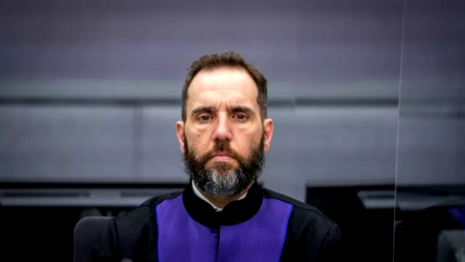 On Saturday, CNN inadvertently revealed that newly appointed Special Counsel Jack Smith has the professional background of a partisan hack.

Team CNN was trying to underline his independence in "Who is Jack Smith, the special counsel named in the Trump investigations."

What made it curious is that his character witnesses come from other Democrat squads, like Greg Andres, who was one of Mueller's many Democrat-donating lawyers.

"He knows how to do high-profile cases. He’s independent. He will not be influenced by anybody,” said Greg Andres, a former member of Mueller’s team.

He was recruited into the Obama Justice Department:

In 2010, he became chief of the Public Integrity Section of the Justice Department, where he oversaw litigation of public corruption cases. Lanny Breuer, the former assistant attorney general for the DOJ’s Criminal Division who recruited Smith, said his onetime employee was “a terrific prosecutor” with a “real sense of fairness.”

Then there's his part in the indictment of another Republican who was once considered to be a possible presidential candidate in 2016, Virginia Governor Bob McDonnell:

He was the head of the public integrity unit when then-Virginia Gov. Bob McDonnell was indicted in 2014, and was in meetings with the defense team and involved in decision-making leading up to the charges, according to a person familiar with the case.

McDonnell was initially convicted of receiving gifts for political favors, but then his conviction was overturned by the Supreme Court.

CNN didn't mention that it was overturned by a UNANIMOUS decision of the Supreme Court which means that even the high court's liberal justices thought the indictment and conviction were horribly flawed.

However, the most damaging aspect of Smith's background necessitated that CNN devote the final nine paragraphs of the story in its own section to try to explain it in "Smith interviewed as part of Republican-led IRS probe." Such a long explanation was needed by the fact that Smith was involved with the infamous Lois Lerner who used the IRS to target Tea Party and other conservative groups via auditing and application processing delays in 2010.

In May 2014, the House Oversight Committee interviewed Smith behind closed doors as part of the Republican-led investigation into the alleged IRS targeting of conservative groups. Then-Oversight Chairman Darrell Issa launched the probe following a 2013 inspector general report that found delays in the processing of applications by certain conservative groups and requesting information from them that was later deemed unnecessary.

Republicans sought testimony from Smith, who at the time was Public Integrity section chief, due to his involvement with arranging a 2010 meeting between Justice Department officials and then-IRS official Lois Lerner, the official at the center of the IRS scandal. The meeting had been convened to discuss the “evolving legal landscape” of campaign finance law following the Citizens United Supreme Court decision, according to a May 2014 letter written by Issa and Rep. Jim Jordan, the Ohio Republican who is expected to be House Judiciary chairman next year.

“It is apparent that the Department’s leadership, including Public Integrity Section Chief Jack Smith, was closely involved in engaging with the IRS in wake of Citizens United and political pressure from prominent Democrats to address perceived problems with the decision,” Issa and Jordan wrote in the letter seeking Smith’s testimony.

Smith testified that his office “had a dialogue” with the FBI about opening investigations related to politically active non-profits following the meeting with Lerner, but did not ultimately do so, according to a copy of his interview obtained by CNN.

Smith explained that he had asked for the meeting with the IRS because he wanted to learn more about the legal landscape of political non-profits following the Citizens United decision because he was relatively new to the public integrity section. He said that Lerner explained it would be difficult if not impossible to bring a case on the abuse of tax-exempt status.

Jack Smith concludes with an indignant outburst about his supposed integrity being questioned.

“No. And maybe I can stop you guys. I know there’s a series of these questions. I’ve never been asked these things, and anybody who knows me would never even consider asking me to do such a thing,” Smith said.

It's telling that Merrick Garland chose someone with such a flawed professional background as Special Counsel Jack Smith to investigate Donald Trump. Oh, and thank you CNN for revealing that background.