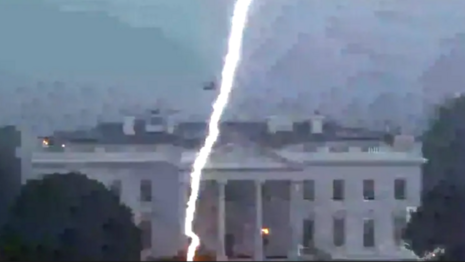 Three people were killed by a lightning strike on Thursday just across the street from the White House and Reuters used the sad occasion to hype... climate change. I kid you not as their own headline on Friday reveals: "Washington DC lightning strike that killed three offers climate warning."

Reuter's reporter Gloria Dickie then goes into the details of how this tragedy is indicative of climate change starting with the very first sentence of her story:

Scientists say that climate change is increasing the likelihood of lightning strikes across the United States, after lightning struck at a square near the White House, leaving three people dead and one other in critical condition.

The hot, humid conditions in Washington, D.C., on Thursday were primed for electricity. Air temperatures topped out at 94 degrees Fahrenheit (34 degrees Celsius) – or 5F (3C) higher than the 30-year normal maximum temperature for Aug. 4, according to the National Weather Service.

More heat can draw more moisture into the atmosphere, while also encouraging rapid updraft – two key factors for charged particles, which lead to lightning. A key study released in 2014 in the journal Science warned that the number of lightning strikes could increase by 50% in this century in the United States, with each 1 C (1.8 F) of warming translating into a 12% rise in the number of lightning strikes.

After a couple of more paragraphs hyping climate change, Dickie finally gets around almost like an afterthought into the details, including information about the victims, of this particular lighting strike which hit Lafayette Square.

Oh good grief. I’m old enough to remember when weather and climate were different things. Now every weather incident becomes another piece by which the left screams about climate change. https://t.co/ZRgMh3gSKK