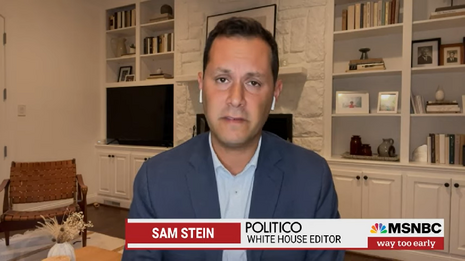 Oh please let it be true!

You could almost hear liberals thinking that thought as Politico's Sam Stein began his report on MSNBC's Way Too Early on Wednesday when he presented a new Politico/Morning Consult Poll revealing that 69% of the respondents claimed that the January 6 riot impacted their worldview.

However, Stein followed up by reporting what really "dominates the political world"--- inflation.

First we see Stein raising the hopes of liberal viewers by presenting the poll results to MSNBC host Jonathan Lemire (who also works at Politico).

JONATHAN LEMIRE: Sam, you brought some new polls for us which we appreciate. As the January 6 Select Committee hearings continue 69% say the attack on the U.S. Capitol impacted their world view. Tell us what that means and how significant it might be.

At that moment, the joy meters of liberals watching would have started to go off-scale. Unfortunately for them, Sam Stein then proceeded to add a cautionary note that splashed some cold water on their hopes.

SAM STEIN: I would just caution though that if you look at it broken down a little bit more by party you get a more nuanced sense of what's happening here which is that at least with respect to these hearings Democrats are paying a lot more attention than Republicans. We tested numbers like how much have you heard? Did you hear about the first two hearings? And the numbers we have here are that 58% heard about the hearings. 56% of Democrats. Only 25% of Republicans.

After that downer of a nuance from Stein, the bigger news.

...We also tested for instance how much people have heard about certain issues and inflation was just dominant. Something like 75% of the people said they heard or read a lot about inflation. So if there is one prevailing issue that is taking the oxygen out of the room it is the cost of goods.

So after revealing that inflation pretty much wipes out January 6 as an issue for voters, Stein proceeded to make things worse for liberals by noting moves like draining the Strategic Petroleum Reserve didn't make a dent.

One of the things they have debated for months was whether or not to do this gas tax holiday. It was derided wildly as a gimmick by then-President Barack Obama, who resisted doing it when prices were going up under his watch. Democrats in Congress earlier this year said they don't think it's going to materially benefit. People could actually hurt because it would deplete the Highway Trust Fund of money. But here we are with the Biden White House saying okay we're going to try a three-month gas tax holiday. Hopefully it can us get us some money for people at the pump, help them with the gas prices, but like you noted you need some support in Congress for this thing and it's not clear that they have enough to get it passed.

So the mood of liberals watching this segment might have started out with a bit of hope but they would have definitely have ended up with a sense of absolute despair with Stein's revelation of it is inflation, not the Jan. 6 hearings, that dominate the attitudes of voters.