Business Insider Meme Hunter Tracks Down 'I Did That!' Sticker Creator 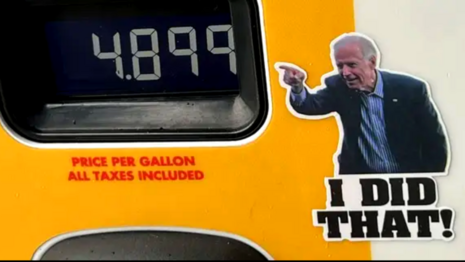 Nina Burleigh of Business Insider who is best known to the world for having "Offered Oral Sex to Bill Clinton to Keep Abortion Legal" found a new mission in life. This time it was focused away from presidential candle sticks to presidential stickers. Specifically, the highly popular "I Did That!" Joe Biden stickers that have appeared pointing at rising prices of gasoline on station pumps during the past year.

Those stickers have so irritated Burleigh that she went on a great meme hunt for the creator. Her Odyssey was described on Monday in "'I Did That!': Anti-Biden stickers are plastered on gas pumps nationwide. But who created them?"

Her meme hunt for the heinous creator was inspired by Burleigh's extreme rage at many for blaming poor Joe Biden for the rise in gasoline prices in particular and for inflation in general.

The "I Did That" stickers are perhaps the most ubiquitous and successful piece of political propaganda that the counterculture right has produced in its semi-deranged campaign to blame Biden for everything from inflation to his son Hunter's "bio labs" in Ukraine to setting up a communist regime in the White House. As with "Let's Go Brandon" and those "Fuck Biden" flags, the style is occasionally clever, frequently profane (there's often a junior-high bully, fart-joke vibe), and always infused with what used to be the province of the left — a kind of joyful, Yippiesque delight in causing public mischief on behalf of a greater cause.

...They started appearing on pumps across the country last summer, as prices began ticking up, much to the frustration of gas-station workers who have to constantly scrape them off. Putin invaded Ukraine about a month before the Lancaster incident, and it's fair to say that the war's effect on oil prices poured gasoline on the Biden sticker phenomenon. Today hundreds of vendors on Amazon and other platforms sell the stickers in packs of 100 for as low as $5.99. An Etsy search for "Joe Biden gas pump stickers" returns 672 results, including variations, like a little "Fuck Joe Biden" sticker to place over the fuel selection button ($10 for a pack of 50 from PatriotSupply76).

With self-righteous indignation, Burleigh then goes on to describe her great crusade to hunt down the "I Did That!" sticker creator who, in her eyes, unfairly blamed Biden for the sudden surge of gasoline prices which began almost from the moment he entered the White House in January 2021.

I started my search for the very first sticker on TikTok and Twitter, which yielded a rough timeline and a working list of the most active retailers. Then I turned to Etsy and Amazon. Scrolling through endless pages of vendors, I zeroed in on a few who were selling the stickers in large packs, at low prices. The mass producers, I reasoned, seemed likeliest to know the origin story. I made some calls, left messages with receptionists, and waited.

She waited and waited but just as despair was about to set in, the "I Did That!" perp turned himself in and proudly confessed all.

Just when I was running low on hope, my phone lit up with a call from West Palm Beach. I almost ignored it as spam, but it turned out to be my lucky break. It was Robert "Bobby" Naklicki, president and CEO of the right-wing merch giant Redneck Nation. During a long and friendly conversation, he told me that he runs a number of companies, including a record label and a MAGA-friendly clothing line called Patriots Pledge ("clothing of the people by the people for the people shall not perish!"). Nacklicki, who looks like an aging Harley rider with a bushy ZZ Top chin beard, wanted me to know that typical lefty assumptions about his brand of Florida Man conservatism are just wrong. "You don't get more conservative than me," he said. "And you know what — I don't care if you're gay. If you want to have an LGBT parade, go do it!"

According to Naklicki, he produced the very first "I Did That" stickers in May 2021, the same month gas prices hit $3 a gallon. "Our brain trust did that," he told me. Once his team came up with the idea, they began printing the stickers in Florida by the thousands.

So now that Burleigh tracked down the sticker creator, who in reality contacted her, will she demand that his stickers be labeled as disinformation despite the fact that sticker version Joe Biden is more truthful by declaring "I Did That!" than the flesh and blood version who is constantly shifting blame for rising gasoline prices to others?