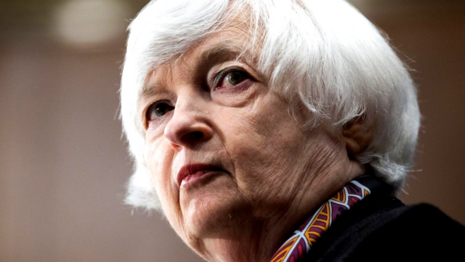 This past week Secretary of the Treasury Janet Yellen made the surprising admission that she was wrong about inflation. However, days later the Saturday Politico Playbook put a not very subtle shift in blame by headlining that "Yellen admits Biden got inflation wrong."

In addition to shifting inflation blame to Biden and away from Yellen, Politico went even further by portraying Yellen as a sort of secret inflation fighter within the administration. The problem with that spin that contradicts Yellen's own admission is that it relies on a Saturday Bloomberg article about a soon to be released Yellen biography that proclaimed "Yellen Wanted Biden Relief Plan Cut by a Third, Biographer Says" yet skipped the vital parts of the story that counter that claim.

Democrats will be arguing over who got what wrong on inflation for years to come. One of the questions about the Biden administration has been whether there was anyone inside offering the president an alternative economic argument about inflation. Evidence of a great debate between competing camps has been slim.

Now Bloomberg reports that in a new book about JANET YELLEN, the Treasury secretary was an early internal dissenter:

“‘Privately, Yellen agreed with Summers that too much government money was flowing into the economy too quickly,’ writes OWEN ULLMANN, the book’s author and a veteran Washington journalist, referring to former Treasury Secretary LAWRENCE SUMMERS, who severely criticized the size of the aid plan

“Yellen’s concern about inflation ‘is why she had sought without success to scale back the $1.9 trillion relief plan by a third early in 2021 before Congress passed the enormous program,’ wrote Ullmann, who had ‘unfiltered access’ to Yellen as he researched the book, according to publisher PublicAffairs.”

Yellen was recently the first top Biden official to admit she was incorrect in her 2021 public remarks on inflation.

“I think I was wrong then about the path that inflation would take,” she told CNN’s Wolf Blitzer this week after he showed clips of her calling the problem “small” and “manageable.”

The problem is that Politico neglected to cite a Treasury department disclaimer in the Bloomberg story:

A Treasury spokesperson disputed the claims.

“The Secretary did not urge a smaller package and, as she has said, believes that without the American Rescue Plan, millions of people would have been economically scarred, and the country’s historically fast recovery would have been far slower,” Treasury spokesperson Lily Adams said in response to the book’s claims.

As to Yellen allegedly agreeing with Summers on inflation, Politico again conveniently neglected to note the part of the Bloomberg story which cited this observation by the biographer:

According to Ullmann, Yellen was angered by Summers’ attacks on the stimulus plan, even though she shared some of his worries.

“Yellen was irritated that he would cause his own party so much grief by arming Republicans and some Democrats -- such as Senator Joe Manchin of West Virginia, a conservative by Democratic standards -- with a justification for opposing subsequent spending proposals on Biden’s agenda,” Ullmann wrote.

So yeah, Janet Yellen could possibly be spun as a secret inflation fighter, despite her own admission to the contrary, but only after some heavy duty cherry-picking on what to report.