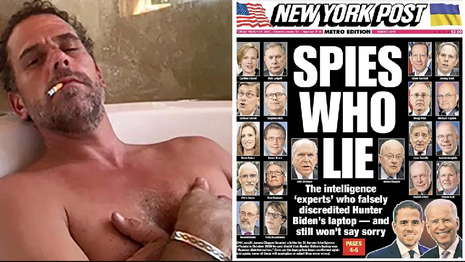 New York Times columnists Bret Stephens and Gail Collins have a weekly conversation. Their conversation on Monday started off on somewhat light note on the subject of light, namely Daylight Savings Time and then wandered into Russia's invasion of Ukraine until it settled on a rather uncomfortable topic for anybody who works at the Times -- the suppression of the Hunter Biden laptop story in 2020 by much of the social and news media, including by the periodical they work for.

Stephens broached the topic and it produced a rather strange response from Collins:

Bret: ...By the way: Did you read The Times’s account of the government’s investigation into Hunter Biden’s tax and foreign-business affairs? The news here has less to do with Hunter himself and more with the fact that those emails recovered from the discarded laptop were his, despite the best efforts by Twitter and other social media and news media companies to bury or not look closely enough at that fact on the eve of the 2020 election.

Gail: I’m so glad our colleagues are still doing strong reporting on this story — Hunter Biden’s scummy business dealings shouldn’t be swept under the rug any more than anyone else’s.

Yes, it shouldn't be swept under the rug as your own New York Times has done since October 2020.

Bret: Not to mention those paintings he tried to sell for up to $500,000 a canvas in nontransparent sales. Nothing at all fishy there.

Gail: That said, I have to admit I’ve never found Hunter’s behavior criminal — just very, very depressing. Fragile son in a family buffeted by tragedy grows up to have a drug problem and makes a lot of money by working for companies that presumably like to have a famous American politician’s relative to trot around.

The same Gail Collins who now finds Hunter Biden's behavior merely "depressing" is the same person who was over the top obsessed with the story about Mitt Romney securing his dog in a hutch on the roof of his car to the tune of a few dozen columns in 2012.

Bret: The D.O.J.’s investigation will tell.

Gail: Some of Hunter’s behavior was obviously unseemly in the extreme. Any new evidence needs to be carefully examined to see if Hunter’s behavior ever went past that into actual criminality — did he claim, for instance, that he could deliver favors from the government because he was Joe Biden’s son?

So far, I haven’t seen it, but whenever Hunter’s name comes up, I do find myself holding my breath.

Gail better not read "Laptop From Hell" by Miranda Devine if she doesn't want to risk suffocation from holding her breath.

Bret: The book to read on this subject is “The Bidens” by Politico’s Ben Schreckinger. It’s no right-wing hit job, which makes its description of Hunter’s business dealings that much more damning. But what really bothered me was the not-so-subtle media effort to bury the email story right before the election as some kind of Russian disinformation campaign. If someone had discovered that, say, Ivanka Trump had left a laptop at a repair shop stuffed with emails about 10 percent being held “for the big guy”— to use a reference that appears to be to Joe Biden, which comes from one of the emails found on Hunter’s computer — would the story have been treated with kid gloves?

If the "not-so-subtle media effort to bury the email story right before the election" bothers you so much, Bret, then why don't you ask your own Times colleagues and editors why they worked so hard to bury it? Both you and Gail act like it is other media outlets that did the burying without admitting that your own periodical was at the forefront of that burial detail.

Gail: Well, Ivanka is a much tidier person. Your mentioning her does remind me that it’s never been clear to me exactly how much, if any, of the campaign donations Trump’s been piling up are going to his kids’ activities.

Not trying to downplay the Hunter story, but in the grand scheme of things, I still think his misdeeds are going to wind up as a sidebar on the Biden saga. Feel free to remind me I said that if half the family winds up indicted.

Can we just remind you that it was your own employer that buried the story in an act of blatant election interference?