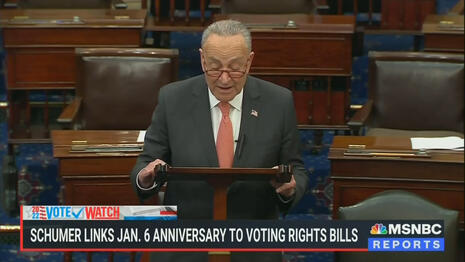 The media is already being flooded with stories this week about the solemnity of the January 6 anniversary. And yet we also have Politico reveling that the Democrats are attempting to use the occasion to engage in flat out partisanship by federalizing the elections at the state level so as to favor that party.

In fact, Rachael Bade and Ryan Lizza are not at all shy about joyfully hyping in the Monday Politico Playbook that "Dems to use Jan. 6 anniversary to supercharge voting rights push."

It’s going to be an emotional week for a lot of people on Capitol Hill. With the one-year anniversary of the Jan. 6 Capitol siege Thursday, Congress is planning an array of memorials and speeches to commemorate one of the darkest days in American history. Lawmakers will have the opportunity to tell their personal stories of what it was like to hide from angry rioters. Cable news will blanket the airwaves with harrowing footage of the assault. Leaders of the Capitol Police will testify before the Senate Rules Committee about the security situation one year later.

Following that build-up, it was time for Bade and Lizza to revel in the Democrats flat out politicizing the occasion by steamrolling Senators Manchin and Sinema.

But Democrats are hoping that Thursday will be more than just a day of remembrance. In the Senate, we hear from well-positioned sources, there’s a desire to take the opportunity to supercharge the party’s long-stalled voting rights legislation — possibly even using the anniversary to try to get Sens. KYRSTEN SINEMA (D-Ariz.) and JOE MANCHIN (D-W.Va.) to go nuclear on the filibuster or embrace rules changes.

HERE’S HOW WE EXPECT THIS TO GO DOWN: Senate Majority Leader CHUCK SCHUMER is expected to lay out a plan today that will bring the party’s push to nationalize voting rights protections to the floor in the coming days. All week, Democrats will argue that the flurry of voting restrictions that have passed in GOP-controlled states over the last year are a direct result of the Jan. 6 riots and the Big Lie promulgated by former President DONALD TRUMP — and that democracy is still very much on the line.

The bill will get filibustered by the GOP — just as it has time and time again.

Yet some Dems think that an argument pegged to Jan. 6 could win over Sinema and Manchin, the party’s two major holdouts against making an end run around the filibuster to pass the voting bill.

Schumer has signaled that when the bill goes down, he will open a debate about changing Senate rules to enable passage of voting measures without the chamber’s 60-vote threshold. That debate, however, could push into next week, as the party puts the squeeze on Manchinema. WSJ’s Siobhan Hughes has more on the latest voting rights push.

And after all that happy hype, sad reality finally set in for the Politico Playbook dynamic duo as they are forced to admit this blatant act of politicizing January 6 probably won't work: "WILL THIS WORK? Probably not."