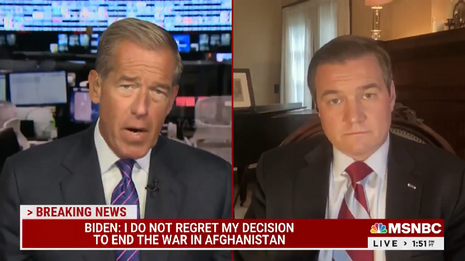 It was probably the most intense encounter Brian Williams has had since his helicopter in Iraq was NOT hit by an RPG. Following Joe Biden's speech on Monday about the disastrous exit from Afghanistan, Williams, as expected, rushed to praise Biden. However, when he turned to his guest, former CIA analyst and Afghanistan war vet Matt Zeller, he must have been shocked that far from concurring with Williams' narrative, he strongly denounced Biden's poorly planned exit from Afghanistan.

First Brian led off with "I am curious to hear your reaction of this consequential speech by the American president. Didn't run from it, he owned it. He owned his decision. He owned the fact that, as he put it, the buck stops with him."

And that led to the reaction from Zeller that Williams probably didn't expect, especially at a network such as MSNBC; complete disagreement.  Zeller led off by taking on Williams' reference to how Biden "owned it" with this sharp retort, "I hope he gets to own their deaths too."

And from there it got even more brutal for Williams.

I feel like I watched a different speech than the rest of you guys. I was appalled. There was such a profound bold-faced lie in that speech. The idea we planned for every contingency? I have been personally trying to tell this administration since it took office. I have been trying to tell our government for years that this was coming. We sent them plan after plan on how to evacuate these people. Nobody listened to us.

They didn't plan for the evacuation of our Afghan wartime allies. They're trying to conduct it now at the eleventh hour. The thing that they were most concerned about were the optics of a chaotic evacuation. Well, they got exactly what they were most concerned of by failing to do what was right when we could have done it. We had all the people and equipment in place to be able to save these people months ago and we did nothing.

This reaction by the impassioned Zeller to Williams' complacently automatic defense of Biden's ineptness caused quite a reaction as you can see.

Wow! I'll bet Brian Williams thought he was under fire in that helicopter again! (Except this time he really DID get set down.) https://t.co/GeopO1FUth

This clip is incredible.

Brian Williams tries to frame Joe Biden's speech as a force of leadership, and Zeller tears it apart piece by piece to show just how pathetic Biden's speech truly was. https://t.co/qFMei9SCin

Not sure why he's lecturing Brian Williams about his service when Williams was right there on those choppers with him. https://t.co/B83JAt0uKL

Exit Question: Will Brian Williams put in for a Purple Heart from being severely wounded during that interview?