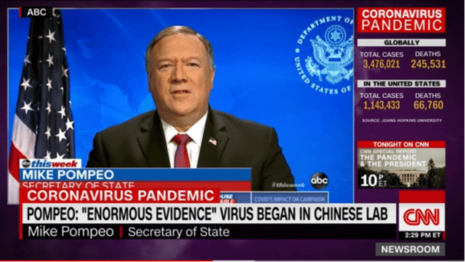 On Friday, Politico published an article, "POLITICO-Harvard poll: Most Americans believe Covid leaked from lab," which revealed the results of a poll showing that a majority of both Republicans and Democrats now view the COVID-19 virus as having leaked from the Wuhan lab rather than it spreading naturally from a bat. The subtitle of the story, "Opinion on the lab leak scenario, once seen as a fringe theory, has shifted dramatically" is interesting because Politico itself was at the forefront of the many media outlets branding the lab leak scenario as "fringe."

The reason for Politico's over the top harsh branding of the lab leak theory appears to have been primarily political as you can see in their April 17, 2020 story, "‘Biological Chernobyl’: How China’s secrecy fueled coronavirus suspicions." The political branding of the theory as "fringe" begins with the subtitle, "U.S. officials are still debating whether the virus emerged from a Chinese lab. But that’s not stopping Fox News." And from there it is all downhill for Politico.

In recent days, President Donald Trump’s allies have seized upon an alternate origin story for the novel coronavirus: that the disease emerged from inside a Chinese laboratory, not an outdoor market.

The basic narrative reads like a dystopian movie plot, and goes something like this: Somehow, the virus escaped from a lab in Wuhan, the Chinese city where the disease first appeared in late 2019. Researchers there were studying dangerous bat coronaviruses, and safety procedures at the facility were not as rigorous as they should have been.

And as it turned out researchers were probably performing "gain of function" research to make the virus even more dangerous which really is like a "dystopian movie plot" but notice how Politico mocks the notion of a lab leak because... Orange Man Bad.

Variations on this theory, once promoted by only a handful of anti-China hardliners, are now being flogged relentlessly every night on Fox News, the president’s preferred primetime viewing. Trump himself has made vague allusions to the lab-jailbreak concept. “More and more we’re hearing the story,” he told reporters when asked about it during a coronavirus task force briefing last week. But other officials, notably Secretary of State Mike Pompeo, have lent it further credence and are now pressing Beijing for answers.

If ever there were a controversy that seemed engineered in a lab to go viral online, it’s this one. Scientists are largely skeptical of the idea, as are top defense officials, but it has given the president’s supporters an alluring new talking point as they seek to deflect blame for the pandemic’s brutal toll on the United States. And it has created a new leverage point for unlocking scientific data that Beijing has kept to itself thus far.

Which scientists were skeptical of the idea? Dr. Anthony Fauci? Dr. Peter Daszak?

And now back to more politics shading Politico's coverage of of the Wuhan lab leak theory:

Tucker Carlson led his weeknight broadcast Thursday by promoting Baier’s reporting and blasting Sen. Tom Cotton’s treatment at the hands of the “little robots” in the news media. The Arkansas Republican has been among the most forceful advocates of the lab storyline and suggested publicly as early as February that the coronavirus was conceived there.

...Sean Hannity, too, opened his program Thursday night with mention of Baier’s story and an indictment that “if Bret’s report is on-target,” then “the Chinese government has blood on their hands. They protected themselves and put the rest of the world at risk.”

Hannity also discussed the allegations with Republican Sens. Lindsey Graham, who dubbed China “the largest state sponsor of pandemics,” and Ted Cruz, who asserted that the Asian power’s “responsibility and culpability for this pandemic is enormous.”

And now Politico's own poll shows that most Americans now believe the Wuhan lab leak theory which a year ago Politico derided as "fringe" for mostly political reasons as they revealed.