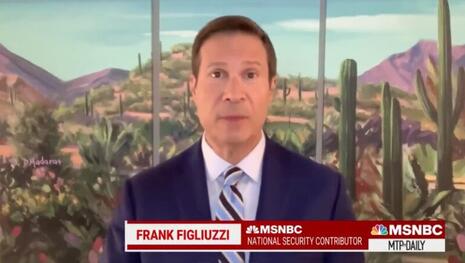 When someone calls for arresting members of Congress not only does he sound coo-coo, he also sounds like he is calling for a coup. What made this call particularly troubling was that it came last week from a former FBI assistant director for counterintelligence who is now an MSNBC contributor.

That infamous figure would be Frank Figliuzzi, who has a history of derangement, including his accusation in 2019 that President Donald Trump was sending a secret signal to neo-Nazis by ordering that flags be lowered.

It's been two years later and Figliuzzi hasn't sounded any less kooky. His latest escapade into the land of derangement came on the June 8 edition of MSNBC's Meet The Press Daily when he suggested the arrest of members of Congress whom he suggested were part of the "command and control element" of domestic terrorism.

Frank Figliuzzi calls the January 6th Capitol riot "domestic terrorism," suggesting that in order to get to root of the problem, "you've got to attack and dismantle the command and control element" and that this "may mean people sitting in Congress right now." pic.twitter.com/KK7Ob6JQHL

And here was the transcript of this scorching hot take:

Look, Chris Wray testified publicly on the Hill that what happened on January 6 is domestic terrorism. What have we learned from our experience with international terrorism? In order to address that problem, arresting low level operatives is merely a speed bump, not a road block.

In order to really tackle terrorism in this time domestically you've got to attack and dismantle the command and control element of a terrorist group. And unfortunately, and I know this is painful to hear, that may mean people sitting in Congress right now, people in and around the former President. That's how you do this.

It is already known that extreme TDS is a job requirement to be an MSNBC contributor but what was scary is that mental derangement apparently does not disqualify one from a high level FBI position.

Exit question: How many more Frank Figliuzzis and Peter Strzoks continue to infect the FBI?