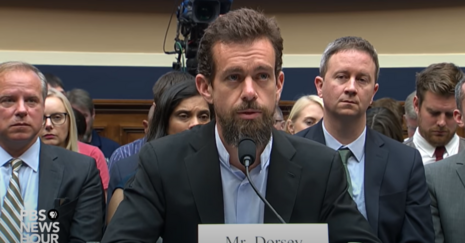 One thing that could be said for Standard Oil's John D. Rockefeller. Although he was a monopolist, he never openly gloated nor mocked the competitors that he suppressed or destroyed. The same cannot be said of the twenty-first century blatant monopolist, Jack Dorsey of Twitter. Not content to act in tandem with other social media monopolists in order to attempt to destroy his competitor, Parler, he rubbed salt in the wound he helped create by  gloating about it with a mocking tweet.

Because Twitter permanently banned President Trump  along with its general crackdown on free speech, many Twitter users have begun switching to Parler which for awhile made it the number one free app download.

This obviously did not sit well with the Orwellian social media giants so acting in tandem, Apple and Google removed access to the Parler app followed by Amazon removing Parler from its web hosting service. Soon afterwards, Parler fell from it's download ranking due to the suppression by the social media monopolies leading to this gloating tweet by Jack Dorsey:

There was a furious reaction to Dorsey's Tweet about a competitor that posed a threat to his monopoly.

You are a pathetic weasel. Please unfollow me before you ban me.

Oh, and it’ll come for you too one day. Read history instead of micro dosing all day.

Signal only hit number 1 because Apple, concert with other big tech companies, nuked their competition https://t.co/LJqew0Z9z7

The result of this collusion among the big social media corporations to suppress competitors means that they have now boxed themselves into a corner where they are forced to go all out to continue to support the Democrats in the future in order to avoid antitrust actions should the party they control lose power.