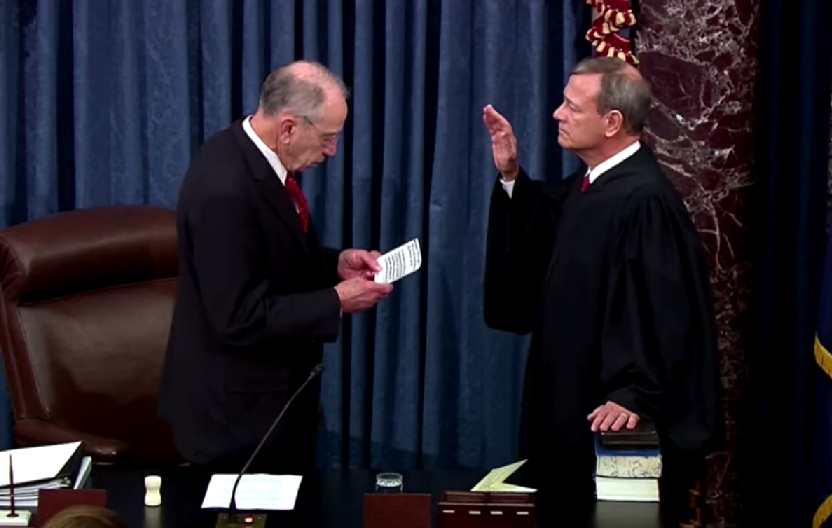 Pass the salt and pepper. It appears that the Washington Post's Dana Milbank has written another column that he needs to eat. This time it is a column chock full of abusurdity so it will probably be harder to digest than during Milbank's previous column dining experience.

The premise of Milbank's column on Thursday is that the real reason why we are currently experiencing an impeachment process is not due to the Democrats' urge to impeach from the moment President Trump was elected in 2016. No, according to Milbank the true impeachment culprit is..... Chief Justice John Roberts. I kid you not.

Milbank makes his laughable case, which is easily disproven by a quick perusal of the facts, in "John Roberts comes face to face with the mess he made."

There is justice in John Roberts being forced to preside silently over the impeachment trial of President Trump, hour after hour, day after tedious day

...Roberts’s captivity is entirely fitting: He is forced to witness, with his own eyes, the mess he and his colleagues on the Supreme Court have made of the U.S. political system. As representatives of all three branches of government attend this unhappy family reunion, the living consequences of the Roberts Court’s decisions, and their corrosive effect on democracy, are plain to see.

Stand by for Milbank's "proof" which ultimately fails miserably upon quick examination.

Ten years to the day before Trump’s impeachment trial began, the Supreme Court released its Citizens United decision, plunging the country into the era of super PACs and unlimited, unregulated, secret campaign money from billionaires and foreign interests. Citizens United, and the resulting rise of the super PAC, led directly to this impeachment. The two Rudy Giuliani associates engaged in key abuses — the ouster of the U.S. ambassador to Ukraine, the attempts to force Ukraine’s president to announce investigations into Trump’s political opponents — gained access to Trump by funneling money from a Ukrainian oligarch to the president’s super PAC.

...The consequences? Falling confidence in government, and a growing perception that Washington had become a “swamp” corrupted by political money, fueled Trump’s victory.

Ironically, the rebuttal to Milbank's theory that Roberts was the cause of Trump's 2016 victory due to larger amounts of campaign money made possible by the Citizen's United decision was contradicted by a Washington Post report on April 14, 2017:

Clinton's unsuccessful campaign ($768 million in spending) outspent Trump's successful one ($398 million) by nearly 2 to 1. The Democratic National Committee and left-leaning outside groups also outspent their Republican counterparts by considerable margins.

So there you have it. Trump had no campaign money advantage over Hillary Clinton who out spent him by almost 2 to 1 in the 2016 election yet he still won. And this is somehow the fault of Chief Justice John Roberts?