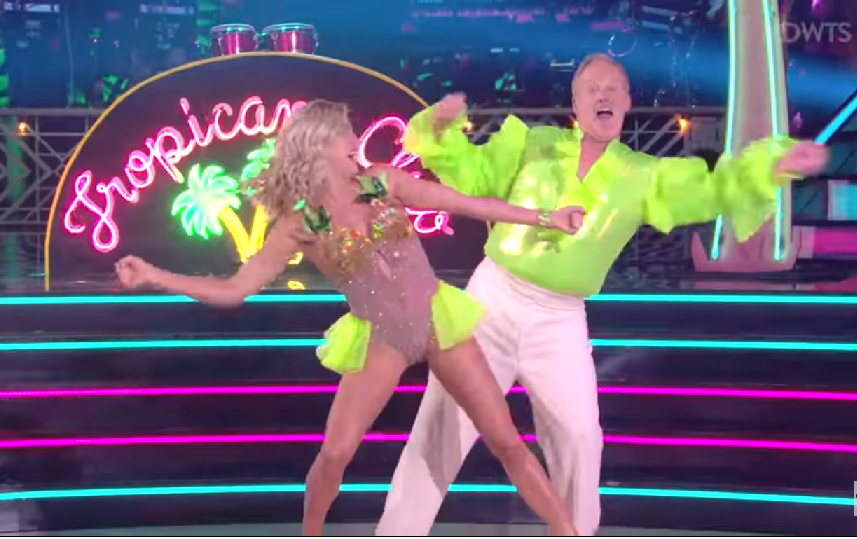 Sean Spicer is a lousy dancer. In fact, he is a downright horrible dancer. The good news is that Spicer seems to have no problem living with that obvious defect. However,  the fact that the former White House Press Secretary remains on ABC's Dancing With the Stars week after week has driven New York Times dance critic Gia Courlas into a state of extreme outrage.

Ironically the fact that Courlas is so upset that Spicer destroys her beloved art of dancing week after week will probably ensure that the audiences will continue to vote for him to remain on the show.  Courlas expressed her disgust with Spicer's lack of dancing ability on Monday in "No, Sean Spicer Really Can’t Dance."

On Monday night, Sean Spicer yet again collected enough audience votes to be deemed safe on ABC’s “Dancing With the Stars.” Kate Flannery was voted off. What’s terrible about this week’s results is that the competition included a dance-off; Mr. Spicer went up against Ms. Flannery. She won, according to the judges. But Mr. Spicer remains, and it’s outrageous.

And it's also hilarious that you seem to be losing sleep over this.

Mr. Spicer’s staying power has little to do with his performances. Over the past eight weeks, he has been the weakest dancer on the show. His low scores from the judges have borne that out.

Bad dancing by a nonprofessional can be disarming. It allows you to see the truth within the body that reveals character. But Mr. Spicer, the former White House press secretary and communications director for President Trump, is something worse: an untruthful dancer.

An "untruthful dancer?" Gasp! Oh the horror, the absolute horror but I think Spicer can live with it, no problem.

Mr. Spicer isn’t trained, of course, but he has revealed much about his soul’s weather through his dancing. He hides behind an egregious smile, parting his teeth to make it look as though he’s been caught mid-laugh. That smile seems meant to distract from his plan of attack: never actually performing a dance, but conquering it.

Somehow I don't think Spicer's soul will be shattered by that critique. In fact it will make his lousy dancing on TV more enjoyable due to knowing it is making you go berserk. "As for Mr. Spicer, he’s as stiff and two-dimensional as a sheet of cardboard, with feet that move as if stuck in slabs of cement and arms that look like they’re still gripping the lectern."

It must be fun knowing that his dancing causes such angst.

Watching Mr. Spicer try to wipe away some of his disgrace through dancing hurts. Yet here he is, week after week, using dance as a way to redeem his character. Giving the public the chance to laugh with him — dressed as a buffoon in that scary green ruffled shirt, dancing to “Spice Up Your Life” — and not at him comes off as a calculation, on his (and probably the show’s) part. And Mr. Spicer’s later performances have been scary in a different way, like his militaristic Paso Doble, which had a cold brutality to it.

Perhaps Gia's delicate sensibilities would not have been offended week after week if liberal celebrities had not worked themselves into a state of rage over the mere fact that Sean Spicer would be appearing on Dancing With the Stars. Since they made such a big deal about it, the public is now getting their revenge by voting Spicer back week after week much to the utter dismay of Trump haters.