The crew on NBC's Today Show had a rather unpleasant revelation this morning. Despite the fact that Donald Trump supposedly had a bad few weeks in stark contrast to Hillary Clinton, he is still in a virtual tie with her in the polls in the key battleground states of Ohio and Pennsylvania. Watch them as they seem to awake from the insistent media narrative that Trump is in a really bad slump.

SAVANNAH GUTHRIE: ...And yet we saw three battleground state polls. In two of the three Ohio, Pennsylvania, you have races that are dead heats. She had some of the best few weeks of her campaign and Trump has had some of the worst few weeks so how do you explain those to her? 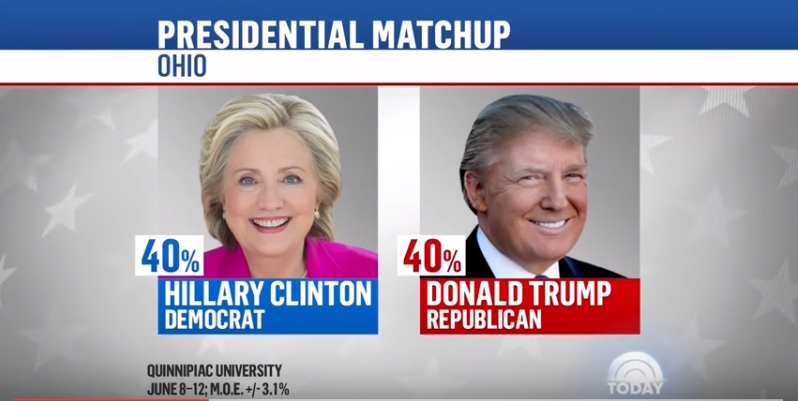 STEVE KORNACKI: It's amazing! If you just took the 2012 electoral map, Obama vs. Romney, and you kept it the same... If you're Trump, if you can slip Ohio, Pennsylvania, and Florida, you're the next president. For all of the trouble he's had, you’ve got them basically dead even in Ohio and Pennsylvania. Florida is bad news for him. He's down in this thing but I think for Republicans, a lot of them look at this and say, if he ran a competent campaign imagine where he would be.

MATT LAUER: How worried is the Clinton campaign about just that? As you just said and Savannah just said, great weeks for Hillary Clinton, terrible weeks for Donald Trump, and they look at those polls in those states... How do they explain that?

A comedy bonus is the look of despair on Savannah Guthrie's face as Matt Lauer is speaking.