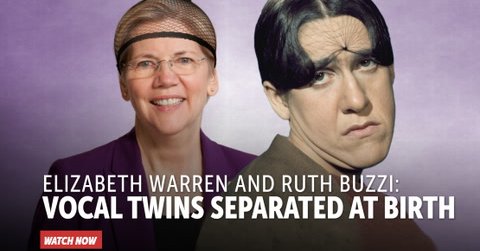 When you hear Elizabeth Warren loudly ranting about Donald Trump do her screechings sound vaguely familiar? Perhaps you were sure you heard someone like that in the past but you can't quite put your finger on it. Well, a recent caller to the Laura Ingraham radio show, Mark from Virginia, finally lifted the veil on that maddening ​mystery when he revealed that Warren was an almost exact vocal twin of the Ruth Buzzi's bag lady character of many eons ago on the Laugh-In television comedy show.

Aha! Now it is clear to you. Of course. And if you doubt the very similar vocal patterns, listen to this clip of Laura Ingraham comparing Elizabeth Warren's rants with those of Ruth Buzzi. They are eerily similar in both voice and attitude.

Of course, despite the vocal simlilarities there is a big difference between Elizabeth Warren and Ruth Buzzi: one is utterly humorless and the other has had a great run in the field of comedy.