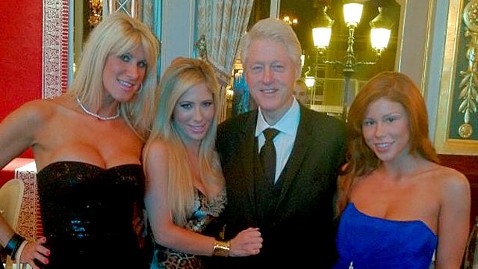 Pay no attention to the president behind the curtain. Instead we want you to focus entirely upon an utterly powerless prince that we are shining the bright lights upon. Despite the fact that other news outlets are bringing up the name of a certain former president we want you to look only at Prince Andrew of Great Britain. Got that? And if you haven't then we will overwhelm you with Prince Andrew mentions whenever we report on the Sex Fiend Island scandal.

Such seems to be the attitude of CNN. Although other news outlets, such as Time, have not refrained from noting the allegations about Bill Clinton, CNN remains resolutely mum about mentioning you know who. Here is the first of the Sex Fiend Island stories published at CNN.Com on Thursday which studiously avoids any reference to the one whose name must remain taboo:

...Earlier this month, Buckingham Palace issued a statement which said, "It is emphatically denied that the Duke of York [Andrew] had any form of sexual contact or relationship" with the woman. "Any claim to the contrary is false and without foundation."

Andrew is a son of Queen Elizabeth II and a brother of Prince Charles, the next in line for the British throne.

This is sounding eerily close to "I did not have sexual relations with that (underage) woman."

Prince Andrew is named in the court filing in Florida as one of a number of prominent people who allegedly had sexual contact with teenage girls through self-made billionaire Jeffrey Epstein, who pleaded guilty some years ago in Florida to a state charge of prostitution solicitation.

Hmmm... And who else was mentioned in that court filing? The next day CNN.Com treated us to yet another Sex Fiend Island story chock full of Prince Andrew but in which a certain someone was obviously missing.

To get quite a bit of detail about the invisible elephant in the CNN.Com room, check out Saturday's New York Post article:

Virginia Roberts, who’s accused Epstein of turning her into a “sex slave” at age 17 and forcing her to sleep with his powerful friends, claimed Clinton stayed in one of the many villas on Epstein’s US Virgin Islands estate — where group sex was a “regular occurrence.”

“I remember asking Jeffrey, ‘What’s Bill Clinton doing here?’ kind of thing, and he laughed it off and said, ‘Well, he owes me a favor,’ ” Roberts told her lawyers in a 2011 interview obtained by RadarOnline.com. “He never told me what favors they were.”

Bubba was accompanied by two of Epstein’s regular girlfriends and “two young girls that I could identify,” Roberts claimed.

...According to flight logs, Clinton flew on Epstein’s private Boeing 727, which Roberts said was outfitted with a special bed for kinky, high-altitude romps, the Web site said.

Perhaps they were just a couple of Clinton Global Initiative interns.

Exit question: Was the Martin Scorsese documentary about Bill Clinton recently ditched because of the growing Sex Fiend Island scandal?