Stelter: 'Too Early to Know' if CNN+ Was 'a Success or a Failure' 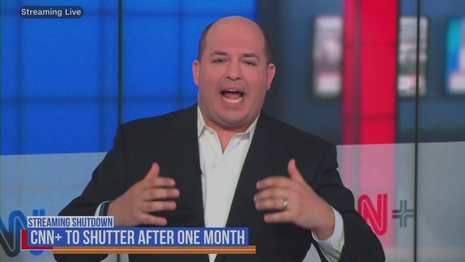 Unflinching from the disastrous result of the “experiment” that was CNN+, company man and host Brian Stelter was defiant on Friday’s edition of his dying streaming show, Reliable Sources Daily. He proclaimed it to be “a worthy venture” for the third-place cable network and suggested it was “too early to know” if the 1-month-old streaming service “was a success or a failure.” And he even lashed out at his new bosses at Warner Brothers Discovery for bringing “suffering” with them.

“Look, it’s one of the biggest stories in media right now. CNN+, the platform for this show is going to be shutting down next week after less than a month in operation! Why,” Stelter exclaimed in faux bewilderment.

Instead of addressing the fact that they were struggling to get subscribers, had uninteresting content, and were just so full of themselves that they couldn’t see it as the folly that it was, Stelter laid the blame on conflicting visions with the new leadership:

Incoming CNN CEO Chris Licht announced to staff that CNN+ will cease operations on April 30. The shutdown comes after Warner Brothers Discovery took over CNN less than two weeks ago. The new leadership team has a strategy that’s quite different than this. They want to have one all-inclusive streaming service that would support what, they say, a standalone platform like CNN+.

Proving he knows who to reach to get the answers he’s looking for, Stelter touted that his sources say “this was just a crazy clash of strategies.” “I think it is and it’s really unfortunate that all of the people at CNN+ got caught in the middle of what is essentially a corporate tug-of-war here,” lamented Matt Belloni of Puck News.

But Belloni bucked Stelter a bit as he blamed CNN’s leadership for defying and angering their new managers with the launch despite knowing their intentions for months when they had a chance to work with them (Click “expand”):

I mean, CNN management knew for 11 months that this transaction was happening and that the Discovery people were coming in and taking over. Yet, even though they knew that, they barreled forward with the launch of CNN+ a couple weeks before the transaction closed.

If they had only waited and said, ‘you know, what? We should probably let the new people who are going to be managing this thing come in and say, ‘okay, what do we actually want to do here?’’ It would have avoided all of this. It could have probably had them saying, ‘you know, let’s scale it back a little and make it a tile on HBO Max and have the product be seamlessly launched within the HBO Max experience.’ And it would have resolved a lot of this stuff.

Stelter eventually fielded his “theory” against Belloni that suggested, “it’s too early to know if this product, if this service was a success or a failure.”

Dismissing “the haters” who can accurately declare it “a failure,” Stelter pressed on, declaring: “I don’t know if we can even ever assess that because it just simply didn’t have enough time because of the management’s change in direction.”

In reality, we’ve seen the reports that CNN+ had under 10,000 daily users and barely 150,000 subscribers despite them throwing over $300 million at the pipedream and hiring talent they couldn’t support.

But again, Stelter couldn’t see that CNN and the now-ousted leadership of Jeff Zucker were the problem and lashed out at the new leadership, suggesting they brought “a lot of suffering for employees and, frankly, disappointment among subscribers as a result.”

As he was transitioning segments, Stelter said he was “going rogue” in order to thank their few subscribers and their other supporters. “This is a worthy venture. This was an outstanding experiment,” he proclaimed. “And it was led by an amazing team of producers, directors, engineers, technicians, including the ones making this program happen right now.”