Jon Stewart: 'The Problem With White People,' All Like Klansmen 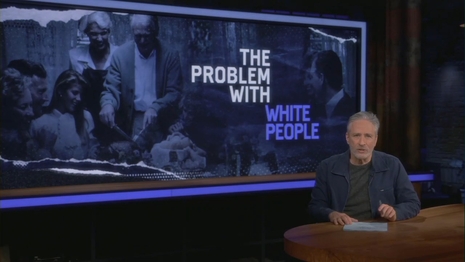 The week after releasing a more or less decent critique of the media’s “bulls***” and “jail-gasm” antics with the Mueller report in his The Problem With show, Jon Stewart squandered the goodwill. With the next episode dedicated to “The Problem With White People,” Stewart and radical leftist guests (all of whom were white) engaged in a type of self-flagellation to score virtue points by suggesting all white people were at some level racist, even on the level of the KKK.

Before bringing on said panel, Stewart showed off a video by Saturday Night Live “comedian” Leslie Jones where she proclaimed “Racism is a spectrum” and asked viewers: “what degree of racist are you?”

According to this “spectrum,” racism ranged from skinheads and the KKK to “Lynyrd Skynyrd fans” and “[t]he ladies who think Meghan McCain got bullied on The View.” “That bitch didn’t get bullied, she ain’t get bullied,” Jones sneered.

She also suggested that even if you didn’t fall into one of her examples that meant you belonged in “the unconscious bias” category, or as she described it, “a catch-all for the rest of y’all.”

At the top of the panel discussion, La Salle University Professor Chip Gallagher warned that a “significant amount of white people” DON’T judge people by the color of their skin. “But they don’t in any way attach any meaning to the color in affecting life chances. And what that fundamentally means is that race doesn’t matter in getting ahead,” he said.

According to him, the danger was that “[i]t makes white privilege invisible” and it allows white people to think that they actually earned something in their lives. “[I]t also makes whites feel that whatever they did, whatever success they’ve had had nothing to do with 50, 100, 200 years ago,” he said in all seriousness.

This nonsense was followed up by Lisa Bond of Race2Dinner, an organization where whites discuss how racist whites are, who put on a true display of self-flagellation and virtue signaling as she touted how she knew she was racist and lamented “white supremacy has done such a good job of teaching us as white people that racism is bad”:

And if we don’t start having a conversation about that and about the ways we are complicit every day daily, if we don’t talk about it, then we are never going to see movement, ever.

The only sense in the discussion came from commentator Andrew Sullivan. “I think it’s possibly the most absurd hyperbole I’ve ever heard,” he scoffed. With Bond throwing a physical hissy fit as he described his experience as an immigrant, Sullivan praised America:

I come from – I’m an immigrant so I have a slightly different view of this. I can tell you, America in 2022 is the most multiracial, multicultural, tolerant, diverse melting pot that has ever existed on planet Earth, and there is no other place on Earth even like it. That’s why 86 percent of our immigrants are non-white. Do you think they want to come to a white supremacist country?

Since this wasn’t the tone he wanted, Steward put words in Sullivan’s mouth and the whole discussion started to spiral. This continued for a few minutes and included Stewart suggesting Sullivan was a hardcore racist. 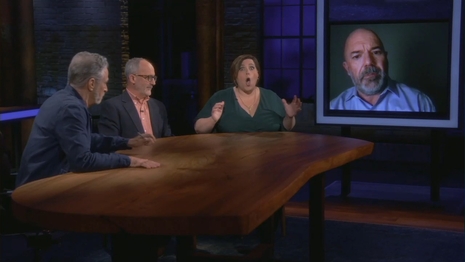 Now’s probably a good time to examine Bond’s organization. According to a profile in New York magazine, Race2Dinner is “[a] collection of affluent white women, equipped with varying degrees of vanity and self-delusion…” Although the cost of one of these dinners wasn’t disclosed in the article, they did note that one of their eight-week seminars ran $750 and admitted Bond had “initially balked at the cost” of a dinner.

“I am 58 years old. I am not responsible for anyone before me,” Sullivan said to Bond as she proclaimed: “I’m shutting you down right now.” She then, to the roar of the radically liberal crowd, reduced every white person (including herself) to the level of someone in the KKK:

One of the conflict points in the panel discussion was Sullivan’s emphasis on education as a vector for improving conditions for individual black people and for the black community. Well, the look on Stewart’s when Scott said something similar said it all:

STEWART: Is it about convincing maybe white Americas that this investment actually enriches everyone?

SCOTT: Jon, I don’t spend as much time on white versus black as you do.

STEWART: I spend most of my time.

SCOTT: I can tell. But to me it’s eliminating the challenges so that everything starts off on a level playing field.

To read the relevant portions of the transcript, click here.