UPDATE I 3/15/22 3:15 p.m.: We now know that Benjamin Hall's crew was hit with Russian artillery fire and two members of his crew lost their lives. Ukraine's Ministry of Defense reports that Hall has lost part of his leg.

UPDATE II 3/16/22 9:14 p.m.: On Wednesday's Special Report, anchor Bret Baier announced that Hall "is now safe and out of Ukraine. Ben is alert and is in good spirits." And he asked viewers to keep Hall and his family in their thoughts and prayers.

The original story is below.

On Monday, terrible news broke that Fox News State Department correspondent Benjamin Hall was hospitalized while reporting outside Kyiv, Ukraine. And according to accounts, he was in a non-military area and the damage may be in regards to his legs.

A little before 2:00 p.m. Eastern and before Hall’s identity was confirmed, Fox News anchor John Roberts broke the news that “we hate to pass along to you, but it’s obviously what happens something in the middle of conflict” in that a reporter had sustained injuries while in harm’s way.

And about an hour later, we got more of the horrific details. Breaking in again, Roberts read from this statement from the company confirming the journalist in question was indeed Hall:

The emotion in Roberts’s voice was obvious.

Following a commercial break, co-anchor Sandra Smith returned with Roberts and told viewers, “We’re all praying for Ben.” And Roberts noted, “we don't know the extent of his injuries yet, but we are all praying for him and for his family that he comes back to us.”

There does seem to be some early accounts of Hall condition and they’re not pretty. 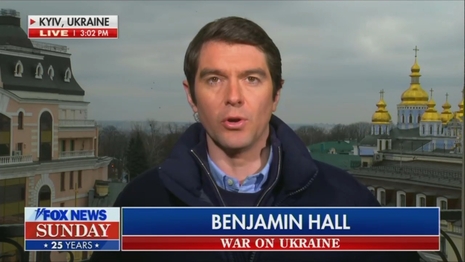 According to a Facebook post Ukraine’s prosecutor general, Irina Venediktova that included a picture of Hall’s press credentials (via the translation from Facebook), “The explosive fracture of two lower ends - a ‘russskomirnyj’ diagnosis, made by Ukrainian doctors to a British journalist.”

Through the uneven bad translation from Google, it seems Halls was the victim of some sort of explosion that did damage to his legs.

Hall wasn’t the first American journalist to become a victim in the conflict. Over the weekend, an award-winning filmmaker for TIME Studios and former New York Times photographer, Brent Renaud was killed while also reporting on the war outside Kyiv.

“Kyiv police said Renaud died after Russian forces opened fire on his car in Irpin, which is just outside the capital of Kyiv,” Politico reported on the tragedy. “American journalist Juan Arredondo was traveling with Renaud when both were shot, the Associated Press reported. Arredondo was wounded in the lower back.”