NewsBusters Podcast: Media Resolute to Make Everything a Threat to Democracy 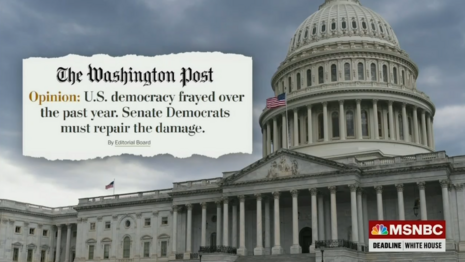 NewsBusters rings in 2022 with Nick “Night Train” Fondacaro filling in for Tim Graham and discussing the liberal media's New Year resolution to make every day, this midterm year, about January 6 and everything they don't like into a threat to democracy; all in an attempt to swing the election for Democrats.

I’m also joined by research director Scott Whitlock to talk about the media’s refusal to better themselves as they stoke hatred against the right.

After discussing how the liberal media weren’t blaming Democratic Virginia Governor Ralph Northam for the snow disaster on I-95, while liberals blamed Governor-elect Youngkin, I reviewed the media's New Year resolution CNN’s Brian Stelter and CNN columnist Nicole Hemmer cooked up to make everything a threat to democracy.

Continuing with Stelter, Scott and I call him out for his reckless speculation that Fox News host Sean Hannity was “in on it” in terms of being part of a plot to riot at the Capitol on January 6. Stelter didn’t share what was in Hannity’s messages; but ABC did, showing Hannity wasn’t in a loop about a riot and was fearful of the unknown of that day.

We also voice our disgust with CNN columnist Dean Obeidallah for his post-Christmas piece saying it was okay to send threatening messages to James Schmeck, an Oregon father who said “Let’s Go Brandon” over the phone to President Biden. He openly mocked Schmeck getting those messages saying: “Aww, poor ‘victim’ Schmeck.”

Enjoy the show below or wherever you download your podcasts.