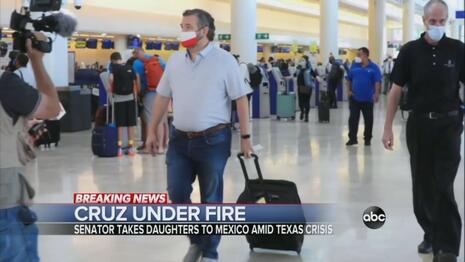 Along with ignoring the moves by state Democrats to remove his emergency powers and possibly impeach him, the left-leaning broadcast network spent nearly four times the airtime (3.85 to be precise) focused on Texas Republican Senator Ted Cruz’s bad Cancun optics than on Cuomo.

Even worse, the newscast has yet to even acknowledge Saturday's resignation of TJ Ducklo as White House deputy press secretary after it became public on Friday that he had threatened Politico's Tara Palmeri.

In all, World News Tonight spent three minutes and 28 seconds going after the Republican because, according to him, he was dropping off his daughter and her friends in Cancun, Mexico since her school was canceled the rest of the week. His decision to take the trip came as Texas was in the middle of a crisis where many were without power and water as a deep freeze crippled the state’s power grid.

But judging by the fervor in which ABC correspondent Trevor Ault was going Cruz, one would think he was the cause of the outage. “Just Monday, Cruz warned his fellow Texans a dangerous storm was coming. Even urging them to stay home,” he told viewers. “Of course, the Senator didn't stay home himself. Two days later, he was off to Mexico.”

Ault even boosted comments from a random guy who said Cruz should just stay out of the country:

RANDALL HALL: He can stay there, actually.

AULT: Yeah? You don't need him back?

HALL: We don't need him back in Houston or in the U.S. Senate, no.

Of course, Ault was more than happy to include a soundbite of Houston Mayor Sylvester Turner (D) suggesting Cruz was going to Hell. “Well, it’s certainly much warmer where he's going, let me just put it like that,” he told the press.

Meanwhile, ABC’s Cuomo coverage was wedged into a larger report about the race to get people vaccinated and how the winter storms were hampering that effort. And as correspondent Stephanie Ramos began to talk about it, she almost sounded as though the investigation was also a hindrance.

“And now, new scrutiny of how the pandemic was managed early on. Sources tell ABC News that FBI and federal prosecutors are investigating New York Governor Andrew Cuomo's COVID task force, focusing on its handling of nursing homes,” she huffed while trying to distance Cuomo.

Ramos continued to back the Governor up, saying: “Cuomo has long defended his decision to send hospitalized COVID patients back to nursing homes, saying he was just following federal guidance at that time.” That up with an un-fact-checked Cuomo lie about how the virus spread within the state’s nursing homes. “COVID did not get into the nursing homes by people coming from hospitals,” he said in the soundbite. We know that’s not true, but Ramos shared it anyway.

A new report found nursing home deaths may have been undercounted by as much as 50 percent. The Governor's top aide also recently admitted his office delayed turning the numbers over to the state lawmakers.

There was no ambiguity to the facts, aide Melissa DeRosa admitted the administration was withholding the numbers to hide them from the Department of Justice. And New York Attorney General Letitia James said definitively that the administration undercounted nursing home deaths.

World News Tonight still has yet to report how New York Democrats were rebelling against their corrupt Governor and how he reportedly threatened to end the career of one assemblymember.

ABC’s ridiculous double standard with what constitutes a real scandal was made possible because of lucrative sponsorships from Humana and Progressive. Their contact information is linked so you can tell them about the biased news they fund.