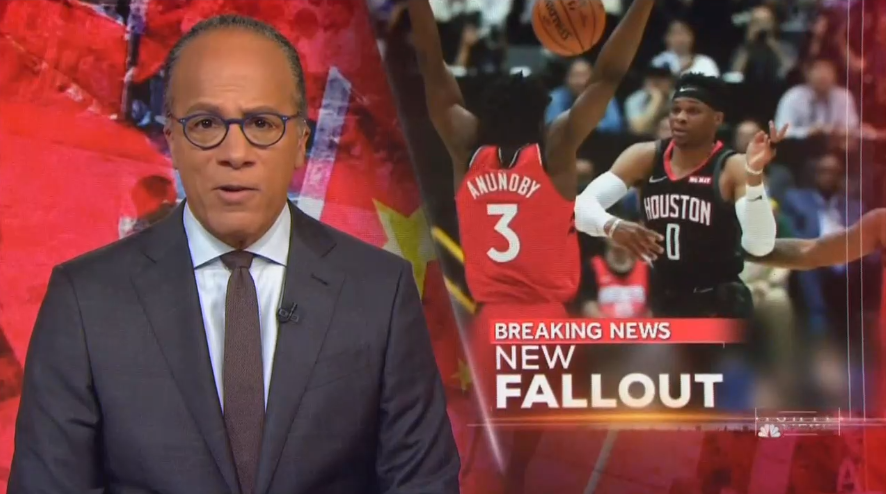 While failing CBS Evening News anchor Norah O’Donnell suggested the NBA was in a “free speech dispute with China,” the facts showed the league was perfectly fine with cracking down on free speech targeting the murderous communist state. In back to back nights, the NBA ejected peaceful advocates for democracy and freedom in Hong Kong from games here in the U.S.

Despite the NBA doing the bidding of the communists, the liberal broadcast networks blacked it out from their flagship morning and evening newscasts on Wednesday and Thursday.

At a Philadelphia 76ers game Tuesday night, “A fan of the NBA's Philadelphia 76ers was removed from a preseason game against a Chinese team after he held signs and chanted in solidarity with pro-democracy protesters in Hong Kong,” CNN reported. The fan was also wearing a “free Hong Kong” t-shirt.

Then on Wednesday, more fans wearing “free Hong Kong” shirts had their sign taken away while at a pre-season game between the Washington Wizards and the Guangzhou Loong Lions, a Chinese team. “Another fan, Jon Schweppe, decided to leave when security tossed his sign that said, ‘Google Uyghurs,’ referring to a Muslim ethnic group who US officials say are the victims of human rights abuses in China,” the New York Post stated.

Neither ABC News, CBS News, or NBC News covered these events during their morning or evening newscasts. It’s particularly disappointing for NBC since they wrote up an article about the second incident and posted it online. And, as NewsBusters had previously pointed out, ABC has been extremely reluctant to report on Chinese censorship because their parent company, Disney, was in bed with the communists. They even needed China to approve their acquisition of Fox.

Instead of being appalled by China’s influence over the NBA, Thursday’s CBS This Morning marveled at China’s ability to control. “It's amazing how much power the Chinese government has over commerce this that country,” declared co-anchor Tony Dokoupil. “Really something to keep in mind when you think about how great Chinese people are, but that government and that system of control,” added co-anchor Vladimir Duthiers

In another shocking display of the NBA’s submission to their Chinese overlords, the NBA refused to allow CNN reporter Christina MacFarlane to question Houston Rockets players James Harden and Russell Westbrook about the league kowtowing to China.

During the press event, MacFarlane asked: “The NBA has always been a league that prides itself on allowing its players and its coaches being able to speak out about openly about political and societal affairs. I just wonder after the events of this week, and the fallout we’ve seen, whether you’d both feel differently about speaking out in that way in the future.” She was shot down by an official and had the microphone taken away from her.

NBC Nightly News that evening noted the incident, but they suggested the players just didn’t want to answer Macfarlane’s questions.

MACKEY FRAYER: The team at the center of the controversy was asked about it.

MACFARLANE: This is an event that happened this week during the NBA.

UNIDENTIFIED WOMAN: Any other questions?

O’Donnell brushed over the events of Thursday, only mention that there was an exhibition game in China. Adding, “Fans were given flags to wave in support of the communist state. Tensions started last week when the GM of the Houston Rockets tweeted support for anti-government protesters in Hong Kong.”

ABC’s Good Morning America and World News Tonight, have not touched the NBA/China issue since Tuesday evening, before the NBA was cracking down on American fans.

VLADIMIR DUTHIERS: The NBA pressed ahead with an exhibition game between the Los Angeles Lakers and Nets in Shanghai that is happening, actually, right now. Earlier, banners advertising this week’s NBA preseason games were taken down amid backlash against the league. The controversy was triggered by a new-deleted tweet by the general manager of the Houston Rockets who showed support for the pro-democracy movement in Hong Kong.

Now, some NBA events ahead of the game were canceled, and the game will not be broadcast anywhere in China. The teams have one more game scheduled in China. That is happening on Saturday. A couple of big advertisers pulling out.

TONY DOKOUPIL: It's amazing how much power the Chinese government has over commerce this that country.

DOKOUPIL: As of a few days ago, the Wall Street Journal reported you can't even buy Houston Rockets apparel on the internet there.

MASON: Right. It's all of there because of one tweet.

DUTHIERS: Really something to keep in mind when you think about how great Chinese people are, but that government and that system of control.

NORAH O’DONNELL: There was no time out today in the NBA's free speech dispute with China. Chinese TV refused to show a preseason game in Shanghai between the Los Angeles Lakers and Brooklyn Nets. Fans were given flags to wave in support of the communist state. Tensions started last week when the GM of the Houston Rockets tweeted support for anti-government protesters in Hong Kong.

LESTER HOLT: In China, an NBA exhibition game featuring Lebron James went on as scheduled, despite nearly a week of tensions between the country and the league. And now another major U.S. company, Apple, is being accused of caving to China. NBC's Janis Mackey Frayer is in Shanghai.

JANIS MACKEY FRAYER: Some empty seats. No national anthems. But it was game on for the NBA in China. In a week that pitted the league against China’s government, turning basketball into a geopolitical storm.

That the game even went ahead is a sign there could be a truce. What isn't clear is who makes the next move.

UNIDENTIFIED CHINESE WOMAN: You have to be very sensitive about what people care about.

MACKY FRAYER: Triggered by a team executive’s tweet supporting protests in Hong Kong, the backlash in China has been fierce, events canceled, broadcast plans scrapped, the NBA stoking anger even further by holding firm in its position on free speech, risking a $4 billion empire in China.

ADAM SILVER: We'll have to live with those consequences.

MACKEY FRAYER: The team at the center of the controversy was asked about it.

MACFARLANE: This is an event that happened this week during the NBA.

UNIDENTIFIED WOMAN: Any other questions?

MACKEY FRAYER: The NBA later apologized, saying that was “inconsistent with how the NBA conducts media events.” The Chinese market is lucrative for many American companies, but full of tripwires.

PATRICK MOORHEAD (Moor Insights & Strategy president): We call it the great wall of China, where they censor all content. If they don't like what they see, they pull it.

MACKEY FRAYER: Apple, the latest to be criticized for dropping an app showing Hong Kong protest hot spots, but defending the move, saying the app has been used to target and ambush police. As for the game, it was the Nets over the Lakers by three, with Chinese NBA fans scoring a win too. Janis Mackey Frayer, NBC News, Shanghai.