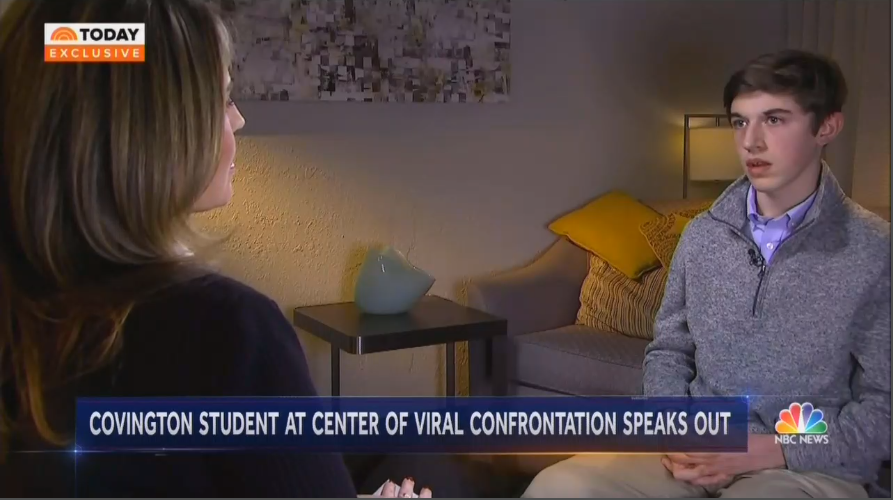 With a promise that “this is only the beginning,” Lin Wood and Todd McMurtry, the lawyers for Covington Catholic student Nick Sandmann, filed a lengthy $250 million lawsuit against The Washington Post for defamation on Tuesday regarding their alleged targeted smears of the teen. The document itself was a scathing takedown of the paper they described as abusing “the profession of journalism” while racing to be “the first and loudest media bully.”

The lawsuit started off by recalling the paper’s coining of “McCarthyism” in a 1950 cartoon they published. “In a span of three (3) days in January of this year commencing on January 19, the Post engaged in a modern-day form of McCarthyism by competing with CNN and NBC, among others, to claim leadership of a mainstream and social media mob of bullies which attacked, vilified, and threatened Nicholas Sandmann (“Nicholas”), an innocent secondary school child,” the suit said.

Throughout the document, the lawyers described The Post as bullies who were driven by political motivations to target him:

The Post wrongfully targeted and bullied Nicholas because he was the white, Catholic student wearing a red “Make America Great Again” souvenir cap on a school field trip to the January 18 March for Life in Washington, D.C.

In targeting and bullying Nicholas by falsely accusing him of instigating the January 18 incident, the Post conveyed that Nicholas engaged in acts of racism by “swarming” Phillips, “blocking” his exit away from the students, and otherwise engaging in racist misconduct

The Post’s campaign to target Nicholas in furtherance of its political agenda was carried out by using its vast financial resources to enter the bully pulpit by publishing a series of false and defamatory print and online articles which effectively provided a worldwide megaphone to Phillips and other anti-Trump individuals and entities to smear a young boy who was in its view an acceptable casualty in their war against the President.

The Post was further accused of “ignor[ing] basic journalist standards because it wanted to advance its well-known and easily documented, biased agenda against President Donald J. Trump (“the President”) by impugning individuals perceived to be supporters of the President.”

“Unlike the Post’s abuse of the profession of journalism, Plaintiffs do not bring this lawsuit to use the judicial system to further a political agenda,” the lawsuit continued. “The Post wanted to lead the charge against this child because he was a pawn in its political war against its political adversary – a war so disconnected and beyond the comprehension of Nicholas that it might as well have been science fiction.”

Sandmann’s lawyers contended their lawsuit had standing because “Nicholas is a private figure for the purposes of this defamation action, having lived his entire life outside of the public eye” and had no interest in being a public figure, suggesting it was forced onto him.

The work put into the document indicated how seriously they’re going to pursue the case. It will be interesting to see which other news outlets find themselves possibly going to court, especially considering this lawsuit suggested The Post was competing with CNN and NBC.