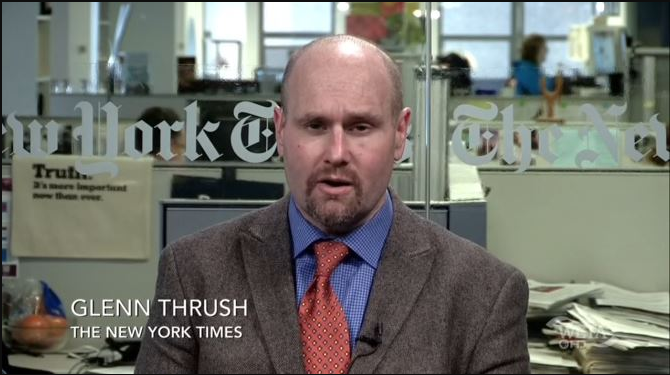 In a report by Vanity Fair published Tuesday, writer Joe Pompeo wrote how “[The New York Times] is ‘torn’ about whether Glenn Thrush should lose his job over sexual-misconduct allegations.” According to the numerous sources, he spoke with inside the Times, the executives were waiting for their internal investigation to turn up more details. The allegations against Thrush included claims he made drunken “inappropriate advances upon women in their twenties,” and he was in his fifties and married.

“Among the multiple current and former Times employees I spoke with (…) people were wrestling with whether the allegations against Thrush warranted his termination,” Pompeo wrote. “A question perhaps complicated by the fact that most of the events occurred prior to his hiring, and did not involve any Times colleagues.”

So far, the only allegations against Thrush had come from women who interacted with him when he worked for Politico. According to the Vox exclusive published on Monday:

Three young women I interviewed, including the young woman who met Thrush in June, described to me a range of similar experiences, from unwanted groping and kissing to wet kisses out of nowhere to hazy sexual encounters that played out under the influence of alcohol. Each woman described feeling differently about these experiences: scared, violated, ashamed, weirded out.

The author of the Vox piece herself was a victim of Thrush’s advances.

According to some of Pompeo’s sources at the Times, the accusations against Thrush were not considered as severe as those against CBS’s Charlie Rose who would strut around naked in front of women who worked for him, or Mark Halperin who would rub parts of himself on female subordinates.

“It was obviously a damning piece; I don’t think anyone would say it wasn’t. But it was also a piece that, like a lot of these things, lived in some gray areas. It’s not an easy call,” one male who worked at the Times told Vanity Fair. And apparently it wasn’t just the men who worked there that were confused about what level of tolerance they should have for Thrush’s behavior:

Others agreed with the amorphousness. “To me,” said another one of my Times sources, a woman, “it makes a difference that [Thrush] wasn’t the boss or supervisor. That mitigates the degree of seriousness.” This person also said that high-level Times figures are “torn” about whether Thrush should keep his job.

“Random House, where Thrush and Maggie Haberman recently landed a significant book deal, was also still processing the news when I checked in with sources there on Monday,” Pompeo added. And Haberman told him to talk with the Times spokespeople.

Pompeo had his own concerns for Thrush’s future. Particularly for Thrush’s ability to go after President Trump for his own history of sexual harassment allegations. “Could it make him vulnerable combatting Sarah Huckabee Sanders in the briefing room,” Pompeo wondered.