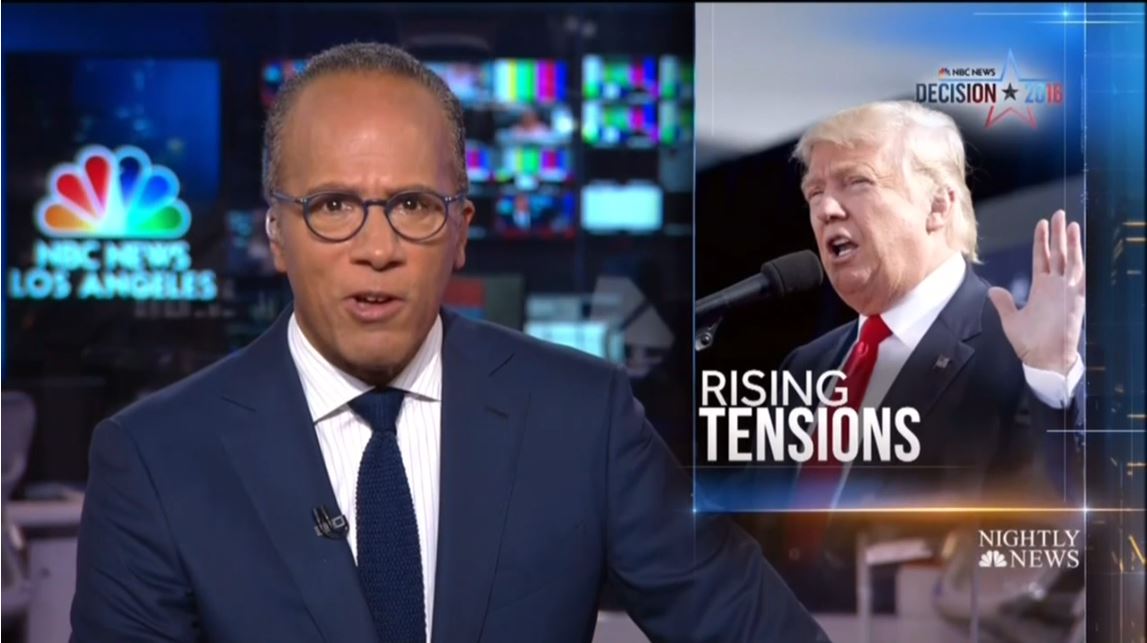 Liberal NBC finally dedicated a serious amount of time to the “political terrorism” committed against the North Carolina Republican Party over the weekend, in the form of a firebombing of an HQ office. But instead of focusing on the heinous act, they decided to paint Republicans as the ones stoking the violence. “Tensions have been rising all year in a campaign that's seen undertones of violence,” reported NBC’s Peter Alexander, while playing clips of fights at Donald Trump rallies on Monday’s NBC Nightly News.

Alexanders report barely touched on the firebombing at all. He mentioned how no one was hurt and that “Nazi Republicans, leave town or else,” was spray painted on a building, then immediately dove into his own painting of Republicans out of control. “The president of the Arizona Republic newspaper says after it endorsed Hillary Clinton last month, the staff's been getting death threats, even the students who sell subscriptions,” he stated.

The NBC reporter then set his sights on Milwaukie Sheriff David Clark for a tweet, “…a Trump supporter, lit up social media over the weekend, tweeting that instead of complaining about government and big media, it's “Pitchforks and torches time.”” He then swiftly pivoted to a Wall Street Journal video of an apparent Trump supporter talking about “taking out” a President Hillary Clinton, among other examples.

No report slamming Republicans would be complete without raising up Democrats, and that is exactly how Alexander closed out his report. “On Sunday, an online appeal asked for donations to help Republicans re-open that fire-bombed office. The money was raised by a Massachusetts Democrat,” he concluded.

The liberal bias in Alexander’s report is palpable. Besides from the brief mention of the firebombing, his report was devoid of instances of violence coming from the left. There is no excuse for the absence of that information since his colleagues Jacob Rascon and Ali Vitali reported back in June how, “Protesters Assault Trump Supporters With Eggs, Bottles, Punches After Rally” in San Jose, California. And a month prior to those attacks NBC also reported that, “"Several" officers were injured after being hit by rocks,” thrown by leftists at a Trump rally in Albuquerque, New Mexico.

It is clear that NBC’s Peter Alexander has joined CNN’s Brian Stelter in placing the blame for the act of “political terrorism” at the feet of Donald Trump and Republicans.

LESTER HOLT: Tonight, police and federal agents are investigating the firebombing of a Republican Party office in North Carolina over the weekend. As the tone of the presidential campaign becomes even more divisive and corrosive with 22 days until the election. We get more on that from our justice correspondent Pete Williams.

PETE WILLIAMS: Tensions have been rising all year in a campaign that's seen undertones of violence [Clips of fights at Trump rallies]. The FBI and ATF are helping police investigate Saturday night's firebombing of a county Republican Party office in Hillsborough, North Carolina. No one was hurt, spray painted on a nearby wall, “Nazi Republicans, leave town or else,” and a swastika. The president of the Arizona Republic newspaper says after it endorsed Hillary Clinton last month, the staff's been getting death threats, even the students who sell subscriptions.

MI-AI PARRISH: People are spitting on them, calling them vile names. Today somebody called and said that if we sent somebody to knock on his door, he would pour boiling water on him and sick his dogs on him.

WILLIAMS: The Sheriff of Milwaukee County Wisconsin, David Clark, a Trump supporter, lit up social media over the weekend, tweeting that instead of complaining about government and big media, it's “Pitchforks and torches time.” Today he says he's advocating political change, not violence. But some talk this year has been ambiguous. The Wall Street Journal interviewed a Trump supporter last week in Ohio who said if Hillary Clinton is elected, she should be, quote, “taken out.”

UNIFENTIFIED REPORTER: It sounds like you're saying that it would be acceptable to assassinate a president?

UNIDENTIFIED TRUMP SUPPORTER: If she's corrupt, why should she be able to stay in office? Answer that question.

WILLIAMS: The secret service won't talk about specific cases, but says it investigates all credible threats. Al Baldasaro, a New Hampshire Trump supporter, said agents called him after he said Hillary Clinton should be tried for treason, convicted and executed.

On Sunday, an online appeal asked for donations to help Republicans re-open that fire-bombed office. The money was raised by a Massachusetts Democrat. Pete Williams, NBC news, Washington.