Media Research Center President Brent Bozell on Thursday mocked media sadness that impeachment isn’t going exactly as planned. Appearing on Varney and Co., he reminded Fox Business host Stuart Varney that Chris Matthews blamed Fox News, adding, “[Matthews’s] thinking was 'Fox News is giving this other side of the story and the American people, half of America, is listening to this other side of the story.'”

Bozell dismissed this MSNBC argument: “Wah, wah, wah! They're not paying attention to us.” Speaking of impeachment hearings TV ratings, the MRC President concluded, “The shocker to the press is not only did the numbers go down in audience, but Trump's numbers went up in the polls as a result of this. They don't know what to do.”

A transcript is below.

ERIC TRUMP JR: The reality is the sentiment of the American people does not connect to what the anchors in these high rise buildings in midtown New York, other than you, are saying. I mean, most of them do not understand the sentiment of the nation and what people care about, and there is a huge disconnect. How few people read The Washington Post. You know who the reads The Washington Post? The people in the beltway, right, who and by the way, universally, they are the most hated people in America by Americans. 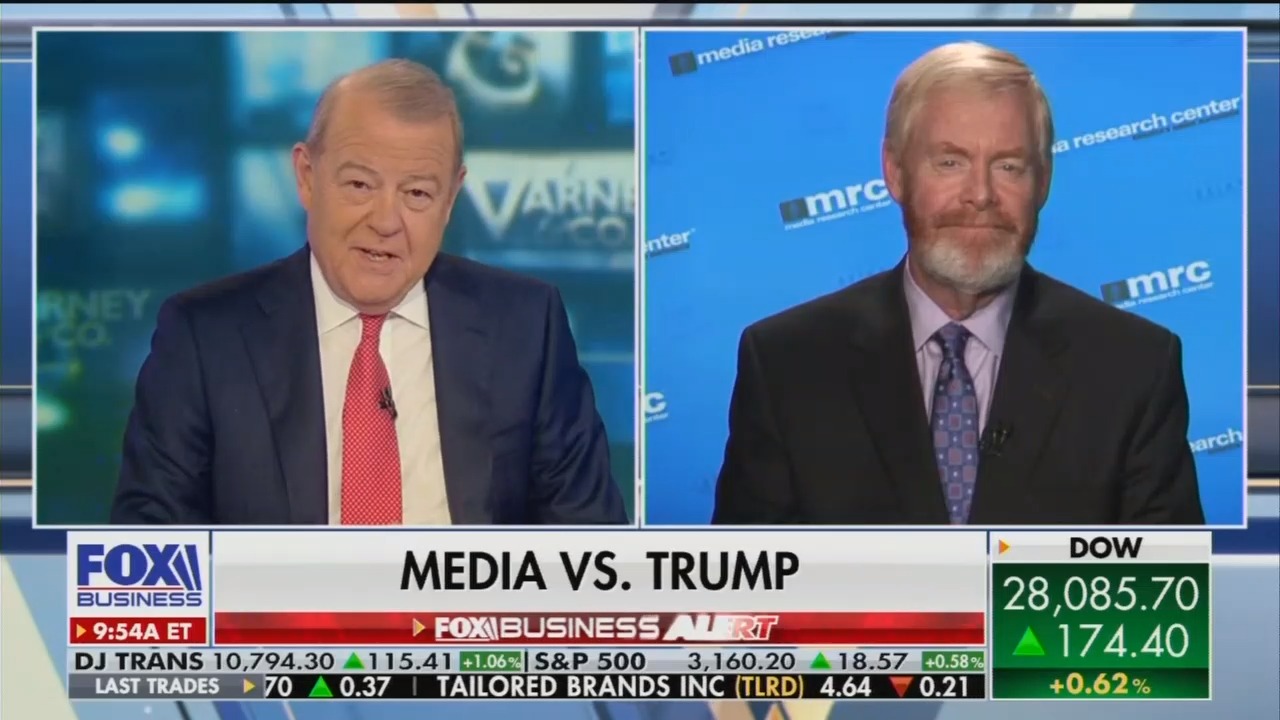 STUART VARNEY: There you have it. The President's son Eric Trump on how the media mistreats his father, the president. Come on in, Brent Bozell with the Media Research Center. Tell me this. I perceived a real disconnect between what the media is saying and how middle America is feeling. You study the media. You've got to see it, too.

BRENT BOZELL: Yeah. It's very interesting. By the way, I just love what Eric just said to you.

VARNEY: So did I.

BOZELL: The other day, Chris Matthews said something really interesting on his show. He was asked this question about, in effect, what's going on with America that America just isn't up at arms about this the way we are? What's wrong with the American people? His answer was Fox News. He blamed Fox News. His thinking was Fox News is giving this other side of the story and the American people, half of America is listening to this other side of the story.

And “Wah, wah, wah! They're not paying attention to us.” He actually said this. So what's happening is that if you were one of the 13 million people in our nation of 330 million that tuned in to the beginning of this impeachment inquiry, I love the word inquiry, they were inquiring nothing. But when you tapped into the inquiry, it took them about 20 minutes to realize that there was no there, there. So the rest who stayed on there, stayed on there just for comic relief to watch this thing. And the shocker to the press is not only did the numbers go down in audience, but Trump's numbers went up in the polls as a result of this. They don't know what to do.

VARNEY: Real fast, I don't have time to run the sound bite, but Lindsey Graham let loose yesterday at the Horowitz testimony. CNN did not carry his testimony. They didn't. I mean, what Lindsey Graham had to say. CNN just didn't cover it. They are in the tank, these guys. They’re going down.

VARNEY: Yeah. Well said. Sir, it's great to have you on the show, Brent. I'm so sorry we give you so little time. So little time.

VARNEY: We’ll stretch it out next time. See you soon.