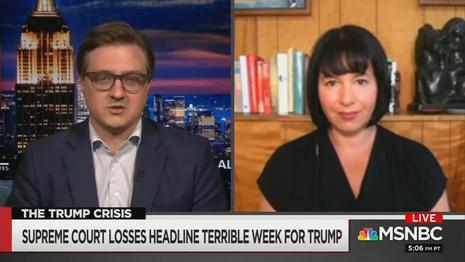 Chris Hayes, host of MSNBC’s All In¸ stated in a Thursday night interview with New York Times op-ed columnist Michelle Goldberg, that Chief Justice John Roberts acted politically to fight the Trump administration on LGBTQ and DACA in order to actually help Republicans in an election year. He particularly cited public polling to bolster the high court decisions.

Hayes explicitly stated that this was Roberts’ way of aiding the Republican Party:

To be honest, I think the Chief Justice, John Roberts, who is in many ways a company man, has been all his life, kind of understands, has probably read those polls and actually knows which way, has diffused two election year bombs for the Republican Party that may not have been the best things if things had gone the other way in terms of the politics of them.

Based on his previous votes, it is bizarre for Hayes to think that Roberts siding with the liberals was done so to help the Republican in an election year. By saying this, Hayes almost undermines the legitimacy of the court, and instead gives the notion to his viewers that the court is so political, even when a conservative justice sides with the liberals, it is done so to promote the Republican Party.

At one point in the exchange, Goldberg declared, “I think the DACA decision is one of the places where [Trump’s] incompetence is actually a mercy, right?” Hayes agreed, as he looked at the case solely as a political decision against Trump.

MSNBC’s All In with Chris Hayes

CHRIS HAYES: Things are bad in the country right now, and the majority of people understand who is chiefly responsible. More on the president's political standing, I'm joined by Michelle Goldberg, op-ed columnist for the New York Times.  And Michelle, things, because things have been so bad and so bad for so long, let's start with good news. Today's DACA decision which for hundreds of thousands of people means this unbelievable weight has been lifted off them. It is the second time in a week the Supreme Court -- I saw a bunch of people saying, I don't know how to process good news. What is your reaction?

MICHELLE GOLDBERG (NYT OP-ED COLUMIST): Well, you know, I think there has been a debate since the beginning of this administration about whether Trump is more dangerous because he's incompetent or less dangerous because he's incompetent, right? Whether a, you know, a sort of person with his authoritarian instincts would better at government would be more a threat or whether because he's so chaotic, and so incapable doing the basic role of governance he puts us all in more danger. And I think the DACA decision is one of the places where his incompetence is actually a mercy, right?

GOLDBERG: They could come up with a way to rescind DACA that this court would have allowed. And so we are all really lucky that they don't have either the will or the personnel to be able to do that. And, you know, I mean, I remember when they rescinded DACA, how terrifying it was, how it seemed as if the deportations could start at any moment. And I think it is really a blessing that we are, you know, hopefully praying that we are coming up towards the end of this administration, and they haven't begun yet.

HAYES: You know, it is also striking to me, too, when you look at the DACA decision and you look at the Title 7 decision on Monday that, that, employers cannot discrimination against LGBT folks. You know, during the primary there is all this discussion about where Democrats are with respect to public opinion, not to get on the wrong side of it. Maybe Medicare For All was something that people don't like.

On these two issues, the Trump Administration and the Republican establishment have been pushing, right. Eighty-three percent of people think it should be illegal for people to be fired based on their sexual orientation, eighty-three percent of people. Seventy-eight percent, illegal for employees to be fired for being transgender. And then on dreamers, eighty-five percent of Americans favor allowing immigrants brought to the U.S. as children illegally to stay. These are massive, massive, majorities of Americans on the wrong side of Republicans or on the other side from Republicans, and is striking to me how far detached they have become from public opinion on these key issues.

GOLDBERG: Right. And Republicans could have seen this, again, as a blessing, that the Supreme Court took it off their plate, right?

GOLDBERG: So that Donald Trump could say, don't blame me. The Supreme Court did this while sort of signaling to everyone else that this is the law of the land. But because he's incapable of governing for anyone except for his base, he had to come out with this tweet about these very popular decisions being a shotgun blast to the face of his supporters.

HAYES: To be honest, I think the Chief Justice, John Roberts, who is in many ways a company man, has been all his life, kind of understands, has probably read those polls and actually knows which way, has diffused two election year bombs for the Republican Party. That may not have been the best things if things had gone the other way in terms of the politics of them.

GOLDBERG:  I think it’s really hard to tell, right.  There is a sense that like losing begets losing, and a president who sort of has the stink of failure and chaos around him just becomes less formidable and less intimidating to people in all kinds of ways, whether consciously or unconsciously.