Latest Feminist Anti-Stigma Trend: The 'Privilege' of Having Herpes 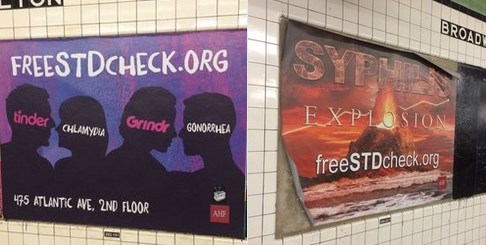 It’s Sexually Transmitted Infection (STI) Awareness Month, and what better way to promote awareness than... being loud and proud by sharing “I have an STI” with the public?

This liberal trend hasn’t hit the media just yet. Silly me for thinking STI Awareness Month (I wasn’t aware there was such a thing) would have something to do with the education of STI’s and prevention. Instead, we have feisty feminists claiming “victimhood” because they have an STI and are tired of the “stigma” surrounding it. Welcome to the strange-pride generation.

In light of STI Awareness Month, some feminists took to issuing a Twitter hashtag campaign #ShoutYourStatus, where women can declare they have an STI because…courage or something.  Yes, there’s actually an entire page devoted to “…the amazing reason women are telling the world they have STIs.”  The #ShoutYourStatus campaign was a creation of writer Ella Dawson, along with social work student Kayla Axelrod, freelance writer Britni de la Cretaz, and writer/activist Lachrista Greco Their goal is to promote a more open conversation about living with STIs.

In a recent interview with Revelist, an online publication that “media publication delivering quality content to millennial women,” de la Cretaz stated, “The truth of the matter is, many people are living, and living happily, as STI+ people… “Being able to be publicly open about my status as someone with genital herpes is a privilege and I want to use that privilege to help other people feel less alone.” She even tweeted the following:

That’s news to me – there are more people that have STI’s than don’t?  I did a quick Google search on “how many people have STI’s” and it shows the answer to be in the millions, so it’s safe to say de la Cretaz has no idea what the heck she’s talking about.

As Robert Stacy McCain points out on his blog, The Other McCain, “Britni de la Cretaz is a recovering alcoholic who has described substance abuse as a way women 'cope with the weight of living in a white supremacist cisheteropatriarchy.' De la Cretaz has argued that sexually transmitted diseases 'should be destigmatized' because people infected with these diseases suffer 'discrimination . . . fueled by harmful stereotypes . . . rooted in misinformation and scare tactics.' De la Cretaz says the 'myth' that women with sexually transmitted diseases are promiscuous involves 'sex-shaming and a whole lot of misogyny'.

Even more outrageous than women giving Twitter a shout out that they have an STI, is the fact that there’s a woman going around teaching 7th graders that her STI didn’t keep her from having a “fulfilling sex life” and actually made her sex life “healthier and more satisfying than before.” That woman’s name is Emily DePasse, a graduate of Salisbury University where she majored in Gender and Sexuality Studies -- of course she did. McCain writes:

DePasse designed her own sex education curriculum, after she said the opportunity to teach the class “fell into my lap…” and “kicked off” her celebration of STI Awareness Month by talking about her “herpes story” with her students. She reflected: “Teaching sex ed this week has taught me that it really, really, REALLY needs to happen over the course of childhood.”

DePasse apparently got her assignment to teach sex to seventh-graders at Baltimore Friends School through an internship with “If I Knew,” which describes itself on Facebook as a “prevention education project of Jewish Community Services” in Baltimore.

What prevention? There’s no teaching of prevention when there are women like DePasse and her feminist posse who advocate that having an STI is like wearing a red badge of courage, but in reality, it’s the equivalent to wearing the scarlet letter.