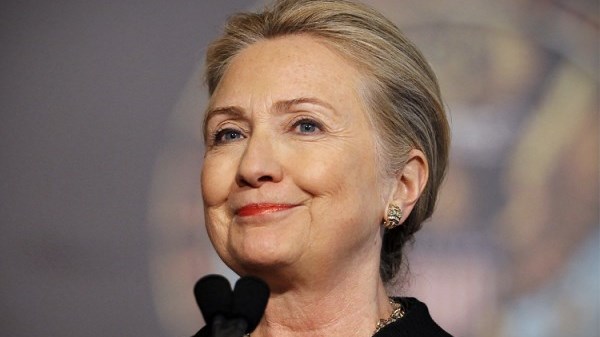 New York Times reporter Amy Chozick was “warned” on Twitter by a group called “HRC Super Volunteers” against using so-called “sexist” words about Hillary Clinton.  The words they deemed “coded sexism” include:“polarizing,” “calculating,” “disingenuous,” “insincere,” “ambitious,” “inevitable,” “entitled,” “over confident,” “secretive,” “will do anything to win,” “represents the past,” and “out of touch.”

For added effect, the group threatened, “You are on notice that we will be watching, reading, listening and protesting coded sexism.”

The “HRC Super Volunteers” appear *out of touch* with reality and should take a hard look at Hillary Clinton.  Maybe then they will understand their hypocrisy.

Many consider Clinton as the forefront leader, a defender of feminism and women’s rights against the make-believe “war on women.”  If these same people based their assumptions on Clinton’s actions, they would recognize that she fails her own supporters. Miserably.

As Hillary Clinton begins to staff her nascent presidential campaign, a paradox has emerged. When she ran in 2008, she played down her potential to make history as the first woman to be president, but her campaign was run by a woman and dominated at the top levels by women. This time, Clinton is properly emphasizing her path-breaking role, but she’s relying on the old-boy network — in large part by taking over President Obama’s heavily male campaign apparatus.”

In fact, Clinton has so many men on her campaign, people are beginning to refer to them as “All Madam President’s Men.” These ‘Madam Men’ include:

When it comes to the issue of equal pay for women, Clinton once said, “…there is still “more work to do,” and that 20 years ago women made just “72 cents on the dollar to men.”  Oh really.  Well, what would these “HRC Super Volunteers” think if they knew Clinton only paid her female staff 72 cents on each dollar paid to men when she was Senator? A wage that mimicked the exact same wage from 20 years ago? The same exact wage differentiation she decried, she paid to her female staffers!  Where’s the outrage?

And let’s not forget Bill.  While any other “feminist” would’ve left a husband that cheated on them multiple times in addition to being subjected to absolute public humiliation, Clinton did the opposite and “stood by her man.” Incidentally, Bill’s extracurricular activities could bode ill for Clinton’s campaign.

It seems as though Bubba is mixed up in a sex scandal due to his involvement and friendship with convicted pedophile and billionaire Jeffrey Epstein. Not only has Epstein been convicted of sexual relations with minors in the past, but new allegations have been brought against him. In addition, Epstein has made significant donations to the Clinton Foundation, both before and after he was accused of sex crimes against young women and girls.  *gasp* The Clinton’s took money from a convicted pedophile….and they knew it! I guess standing up for abused and mistreated women (and underage girls) doesn’t fall into the category of “war on women.” At least not when money is involved. Hypocrisy at its finest.