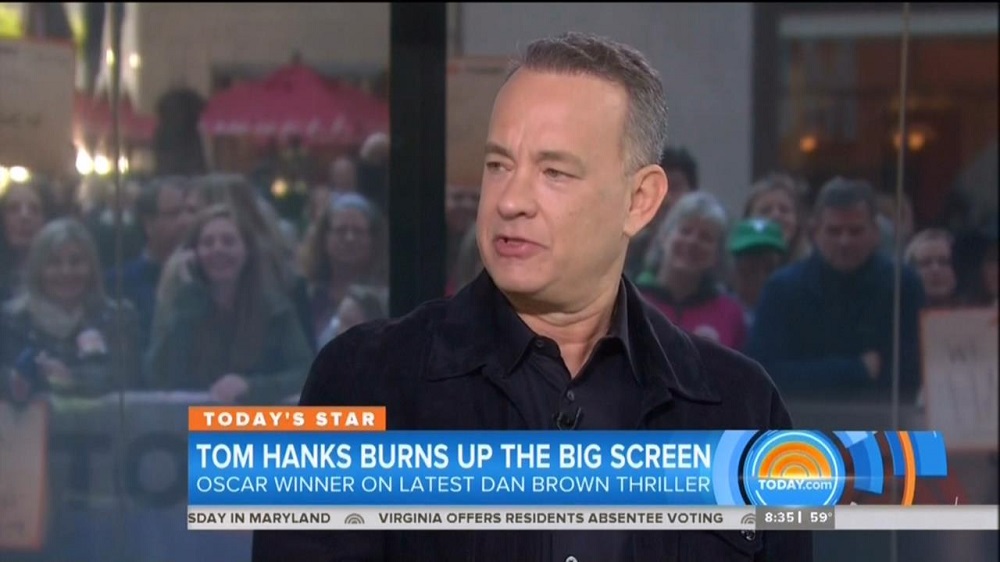 On Monday's Today, NBC's Savannah Guthrie and Tom Hanks boosted the supposed crisis of overpopulation, which is part of the plot of the actor's new movie, Inferno. Guthrie touted "Malthusian theory" during the interview. Hanks revealed that a former professor of his introduced him to "the concept that eventually, the world will have too many people in it in order to subsist on its own." He noted the movie addresses the "quantum physics of overpopulation," and contended that "actually, the math does add up." [video below]

The anchor (who, ironically, is visibly pregnant) introduced the topic by disclosing that "Matt [Lauer] and I are constantly talking about Malthusian theory." Hanks explained what his history professor taught him about overpopulation. Lauer himself gushed over his guest's summary: "You just gave us a twenty-second definition of Malthusian theory, which is amazing!"

NBC has also used its fictional programs to hype overpopulation as an issue. A year earlier, on an October 2015 episode of their drama series Blindspot, a band of fictional environmentalists worked to release infectious diseases in an effort to reduce the world's population. A member of this conspiracy bemoaned that the "greatest threat" to the human race was "modern medicine," as "we create all these vaccines, antibiotics, cures for diseases that should never be cured. This planet was not designed to support eight billion people."

The transcript of the relevant portion of the Tom Hanks segment on the October 24, 2016 edition of NBC's Today:

SAVANNAH GUTHRIE: By the way, you — now, you have to describe this plot to us, but—

GUTHRIE: You know, Matt and I are constantly talking about Malthusian theory—

GUTHRIE: I'm sure you are—

HANKS:  It says it on one of the coffee cups I was given. (Guthrie laughs) You know, when I graduated — when I was at junior college — Chabot Junior College — we finished a history course, and the professor wrote up — you need to learn this word — he wrote up the word 'triage' — which represented, I was told, the concept that eventually, the world will have too many people in it in order to subsist on its own. And that stuck with me for a long time; and that's what 'Inferno' is about — the quantum physics of overpopulation, in an — in an instant, there could be too many people on the planet; and actually, the math does add up.

LAUER: You just gave us a twenty-second definition of Malthusian theory, which is amazing!