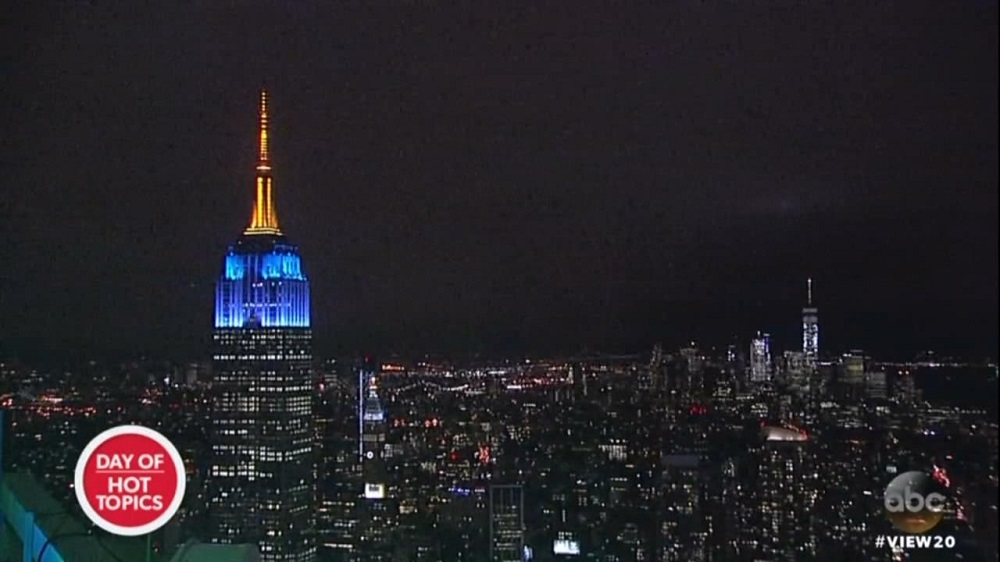 On Tuesday, the owners of the Empire State Building honored ABC's The View by lighting the famed skyscraper "in light blue, teal and orange in celebration of 20 years" of the daytime program. However, the same company rejected a tribute in lights for the 100th birthday of Mother Teresa in 2010, which was requested by the Catholic League [MRC president Brent Bozell is a member of the board of advisors for the Catholic League].

The View's associate producer, Marisa Dabney, posted an article on the talk show's website that recounted how "co-hosts Joy Behar and Candace Cameron Bure lit up the Empire State Building in honor of the show's historic Season 20 premiere. The co-hosts pulled the lever to light up the Empire State Building in the show's colors blue, teal and orange." The producer included a video of a "behind the scenes look at the ceremony," and disclosed that Wednesday's episode of The View would have footage of the lighting ceremony [see video below].

CNSNews's Pete Winn reported in a June 2010 item that "the Catholic League had requested the tribute in February. It was originally denied on May 5, and the League mounted a petition drive to request special blue and white lights. The drive garnered 40,000 signatures--30,000 online and 10,000 sent by mail." Winn also pointed out that the Empire State Building's owners "honored Communist China for the 60 anniversary of their revolution" in 2009, as well as jam band The Grateful Dead.

Catholic League president Bill Donahue blasted the 2010 rejection, after the holding company cited a supposed "policy against any other lighting for religious figures or requests by religions and religious organizations":

"When John Cardinal O'Connor died in 2000, the Empire State Building was lighted in red and white; in 2005, when Pope John Paul II died, the tower lights were extinguished in his honor; also in 2005, the tower was aglow in yellow, red and blue in tribute to the 125th anniversary of the Salvation Army; and every year the colors red, black and green are lit in memory of Rev. Martin Luther King. In other words, there is no policy barring religious figures or organizations from being honored."