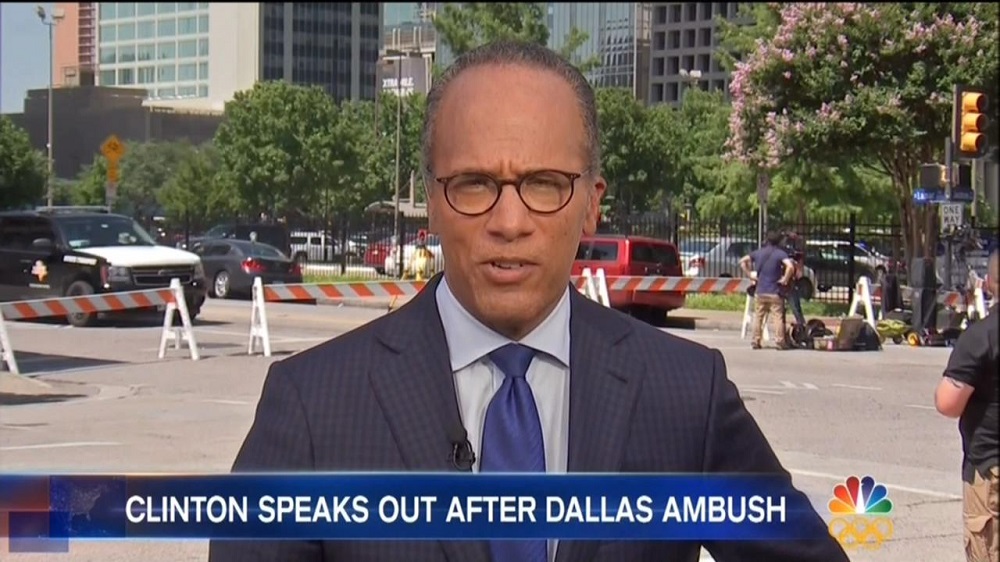 The Big Three networks' evening newscasts on Friday each treated Hillary Clinton different with regard to the FBI closing their investigation into her e-mail scandal. ABC's David Muir didn't mention the subject at all on World News Tonight. Instead, he devoted the entire interview on her response to the massacre of police officers in Dallas. On NBC Nightly News, Lester Holt placed the onus on FBI Director James Comey, instead of Mrs. Clinton, on the issue: "Did he get it right; and if not, where did he get it wrong?" [video below]

Scott Pelley gave a slightly tougher interview of the presumptive Democratic presidential nominee on CBS Evening News: "The FBI director, concluded that you were — quote, 'extremely careless' in handling classified information. How do you plead?" He followed up by asking, "Well, were you 'extremely careless'?"

DAVID MUIR: ...[W]e've been here in Dallas today, and we have sensed the real unease here — a sense that this country has reached a boiling point. And when you're in so many of these communities, they'll tell you that what's being captured on these smartphones...they've been seeing for years; that this is the reality that they face. And on the flip side, you've got police officers — the vast majority of whom are putting their lives on the line every day, like what we saw here in Dallas in the last 24 hours. So, as president, how would you bridge the divide?

HILLARY CLINTON: ...[W]e're asking for criminal justice reform — including national guidelines on the use of force — especially, deadly force. You know, we need to listen to African-Americans, who say that — you know, they feel on edge all the time. When they send their — you know, their kids out, they don't know if they're going to come back. We should listen to the police who get up every day and go to a dangerous job, and who are really worried about their own personal safety. And white people should listen to African-Americans, David. Let's be honest. We should be much more understanding of a lot of the challenges that African Americans face

MUIR: You saw that video that was live streamed on Facebook in the aftermath of those moments in Minneapolis. And I'm curious, Madame Secretary, how you wrap your head around that — what looked to be a routine traffic stop?

CLINTON: I don't understand it. I watched it in horror and disbelief — a routine traffic stop, a routine arrest, escalating to the point where a gun is drawn and a life is lost. That's why I am absolutely calling for national guidelines about the use of force.

MUIR: Secretary Clinton, let me ask you, though, on the flip side — because when the gunfire broke out here in Dallas, you saw so many officers running into the danger.

CLINTON: I think the vast majority of police officers in our country are serving honorably and bravely. And that's why it's very important we support their work — that we respect their service.

Interestingly, Mrs. Clinton didn't bring up gun control in any of her interviews on the Big Three newscasts.

On NBC, Holt broached the e-mail scandal topic with his "where did he get it wrong" question to the former New York senator. He followed up with how Donald Trump has apparently been using the issue in his presidential campaign. Just as she did in her interview with CNN's Wolf Blitzer, Mrs. Clinton regurgitated her talking points on the controversy:

LESTER HOLT: ...[T]his is the first chance we've had to chat since the head of the FBI called you out for careless handling of classified documents on your personal e-mail server. You said that none of the e-mails you sent were marked classified. He said they were. You said it was a single device. He said there were multiple devices. You say you turned over all work-related material. He says you didn't. Did he get it right; and if not, where — where did he get it wrong?

HILLARY CLINTON: Well Lester, I think, yesterday, Director Comey clarified many of the issues that you've just alluded to. Very quickly, he clarified, as did the State Department, that the very few — no more than three documents — that they thought might have some kind of marking, two of them were the result of human error. They were not classified. And I believe and have said many times that I take classified material seriously. I have said I regret using a personal e-mail. We turned over every document in my possession when the State Department requested it; and we turned over every device that we had.

HOLT: But to the extent that there's a disconnect between things you said and what he later found, it's certainly playing into the narrative of the [Donald] Trump campaign — whether you can even be trusted with classified materials. How do you respond to that?

CLINTON: Well, again, I would just repeat, if you read his testimony yesterday, I think there was a lot of clarification. I do not believe that all of the professionals that I dealt with in the State Department were careless in handling classified material. And I'm very proud to have worked with them. And I believe that the clarification that was set forth yesterday answers a lot of the remaining questions.

Pelley led his CBS Evening News interview with two questions on the Dallas massacre. He then quoted Comey's "extremely careless" label of the former secretary of state's handling of classified material in his first two questions. The anchor concluded with voters' ongoing general distrust of Clinton (video available here; Pelley raised the e-mail scandal at the 3:30 mark):

SCOTT PELLEY: Madame Secretary, James Comey, the FBI director, concluded that you were — quote, 'extremely careless' in handling classified information. How do you plead?

HILLARY CLINTON, (D), PRESUMPTIVE PRESIDENTIAL CANDIDATE: Well, I think he clarified that remark during his testimony yesterday; and I appreciated it — as I appreciate the very professional work that they in the Department of Justice did.

With respect to that specific question, there was clarification about the very few — I think no more than three — documents which contained, somewhere in the body, a little 'C' in parentheses — and as the State Department said, about two of them. That was human error. They were not classified documents; and there were no other markings of classification on any other document.

Now, I worked with over 300 people during e-mail exchanges — predominantly, in the State Department; a few in other parts of the government — people with long experience and expertise in handling classified material — and I had no reason to second guess their judgments about the material that they were exchanging, and that they would forward or send to me. And there are still no documents that were marked 'classified' that were sent or received.

But look, I have said I made a mistake using my personal e-mail. I regret that. And I am grateful that this matter has been fully investigated, and has been closed. And it's time to move on.

PELLEY: Well, were you 'extremely careless'?

CLINTON: No, I was not; and neither were the 300 people who sent me that material, Scott. You know, the vast majority of the material was sent to me — it was forwarded to me from professionals — from people, as I said, who had a lot of experience dealing with classified material. I do not think they were careless. I have a very high regard for the professionals in the State Department. So I — I believe that they knew what they were doing, and I had no reason to question or second guess their expert opinions.

PELLEY: And to the voters who wonder whether you can be trusted with the nation's secrets, you say what?

CLINTON: I say I have been, and I have proven that over the course of my eight years in the Senate; my four years as secretary of state. I take classified material seriously. And this investigation has proven that I had no intent to do anything wrong; and that there was a way of doing business in the State Department, where material was moved in real time — because, unlike other departments in the government, we often have to respond quickly to a head of state; to a government official somewhere in the world; to the press. And the people that I was relying on — the professionals; the diplomats who were sending me that material — I believe, knew what they were doing; and they, too, take classified material seriously.