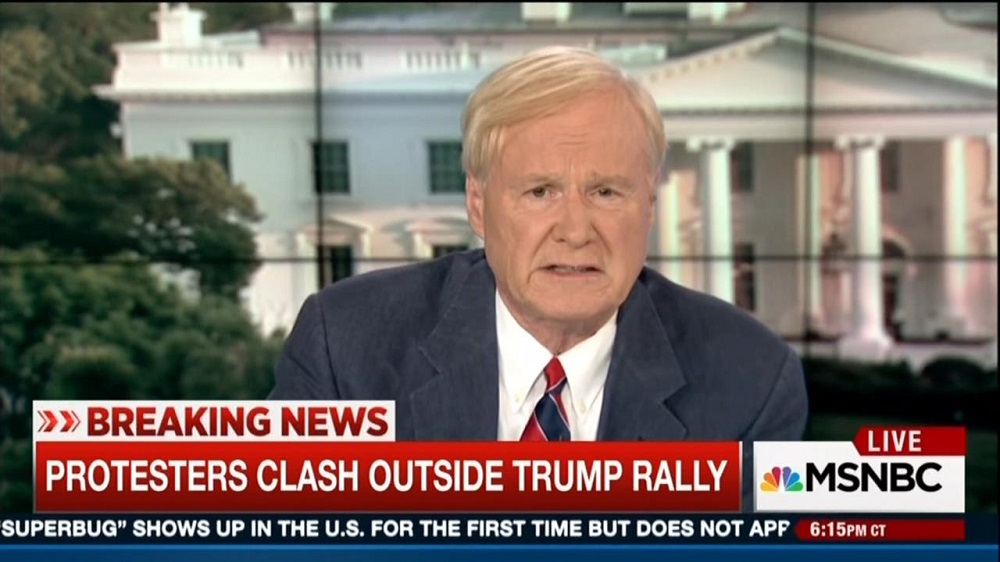 MSNBC's Chris Matthews had one of his classic gaffes on Friday's Hardball as he watched live footage of Trump supporters facing off against protesters outside one of the billionaire's rallies in San Diego, California. Matthews stopped himself from calling the Trump backers "Americans," and continued by labeling them with their apparent political ideology: "So we hear 'USA'  from the Amer — well, the people taking the conservative view — let's put it that way — the ones with the U.S. flags." [video below]

Before turning to Coulter, the MSNBC anchor actually took a skeptical position towards fellow host Joy Reid's liberal talking points about the role of the issue of illegal immigration in Trump's campaign and in the 2016 presidential race in general:

CHRIS MATTHEWS: We're going to bring in our commentators: Joy Reid and Ann Coulter. Joy Reid first — my colleague — what do you see here? What does it mean to you?

JOY REID: You know, Chris, I think that this is the shape of things to come. I think that we are going to have a long, hot summer leading into a fall campaign that is going to break down along this very fault line — because I think that immigration and unlawful immigration was, sort of, the casus belli of the Trump war against the Republican Party and against Republican elites. It was the straw that broke the camel's back, in terms of the bargain that Republican elites have — for 30, 40, 50 years — made, particularly with working-class white voters. You give us your votes; we'll get low taxes for ourselves and deregulation; and we'll give you, sort of, cultural tchotchkes. We'll say we're with you on prayer in school, religion. We're with you on gay marriage.

But when it came to immigration reform — something that George W. Bush wanted to do; something that the Republican National Committee saw as a way to expand the Republican electorate by bringing in Latinos — that was it. And I think that Trump ran right into that breach. He has got these voters. This is their issue. This is the fundamental issue that animates support for Donald Trump — this idea that we're taking this country from them.

REID: Well, I can tell you that, at the moment, net migration from Mexico, in the wake of what—

MATTHEWS: I know. That's not an answer, though, Joy. What in the law — who is coming up with a way of enforcing the law? Is anybody?

REID: Well, I think if you ask advocates for the Dreamers, et cetera, they would point very angrily at the White House and say that the Obama administration — which has had more deportations than George W. Bush ever did — they've been very aggressive — ICE has — about deporting people from the country. So, the administration, actually, right now, has been the, sort of, tip of the spear of being extremely aggressive. And in addition to the fact that the economics have reduced migration to zero, I think a lot of — particularly younger activists — actually are pretty angry at the Obama administration for the way that they've been very aggressive about enforcing those laws—

MATTHEWS: I know they are. Well, because I can understand different sides here; and I can also understand that nobody has come up with — it's the one part of our legal system; one part of our social system — where no one's come up with a connection between the law that we pass and enforcement. Okay, pass the most liberal program in the world for bringing people into the country; and then, enforce it. I don't hear Democrats or progressives talking about enforcement of any kind — for any kind of law — no matter how liberal it is, Joy. That's my problem — that you cannot have a legislature in Washington that's controlling the country — representing the people — that can't seem to pass any law on immigration they're willing to enforce. That's the problem.

REID: Well, a lot of advocates for the Dreamers, et cetera, feel that the law was actually too heavy on enforcement; and that the balance of enforcement versus admittance was actually weighted on the side too much of punishment. Democrats and some Republicans, to their credit — people like John McCain — tried to get that law passed; but Republicans wouldn't allow it....They won't allow immigration reform to get through the Senate and the House. They just won't allow it.

MATTHEWS: Okay. I hear the words 'immigration reform' — I've heard the word 'reform' all my life, and I'm a little skeptical — whether 'reform' means fix the problem — if you think there is a problem.

Matthews then turned to Coulter, who zeroed in on the apparent diversity of the crowd at the Trump event. She continued with her spotlighting of the host's verbal stumble:

ANN COULTER: The unfortunate thing about these protests you're showing, which — which really do make me so angry — because there are 10,000 people inside the stadium tonight. The reports are, it was one of the most diverse crowds anyone has ever seen. You have Mandarin Chinese with signs for Trump — 'Make America Great Again' written in Mandarin. You have groups — huge groups of Hispanics — and they're all chanting, 'Build the wall' — because you got it right before — when you slipped and said something about the protesters versus the Trump supporters — and you called the Trump supporters the Americans. They are the Americans—

COULTER: But they are standing for being Americans! Whether they're Mandarin—

MATTHEWS: But I assume most of the Hispanic people there are Americans, and they wouldn't be out protesting. I wouldn't think—

COULTER: No — but whether they are Hispanic or Mandarin, the ones inside the stadium are Americans and think of themselves as Americans and want the laws enforced. And it's just unbelievable that people are surprised—

MATTHEWS: Well, first of all, Ann, you caught it. It was a slip. I mean, it wasn't intentional. I can tell you. (Coulter laughs)