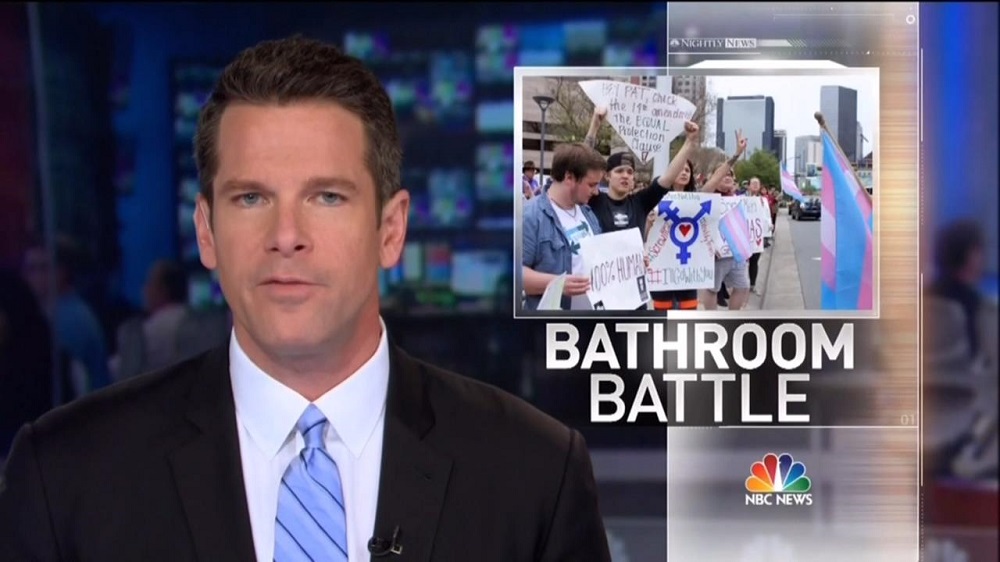 The Big Three networks' evening newscasts on Friday devoted full reports to the Obama administration's controversial letter to every public school district in the nation directing them to allow transgender students to use bathroom and locker rooms according to their chosen sexual identity. However, NBC Nightly News's segment on the issue touted the "Obama administration's historic new directive to the nation's public schools," and revisited a Massachusetts girl who now lives as a boy. Kate Snow touted how the child's mother says the federal government's move is "protection for him at school — and validation that his rights matter." [video below]

Substitute anchor Thomas Roberts (who has a record of acting as a left-wing LGBT activist) teased Snow's report by hyping that "the Obama administration sends a sweeping message to schools across the country: let transgender kids use the bathroom of their choice, or else." Just before using the "historic" term about the controversy, Roberts underlined that "pushback is coming fast and furious" against the policy move.

Snow first featured the Lemay family, whose daughter, Mia, "transitioned" to being called Jacob just over a year ago at the age of four years old. During her April 2015 report on the Lemays, the NBC correspondent played up that "people who are transgender face a greater risk of anxiety and depression, and according to a 2011 survey, a startling 41 percent had attempted suicide." This time, she trumpeted that "for kids like Jacob Lemay, the guidance that students should use the bathroom of their gender identity isn't just some abstract policy. His mom, Mimi, says it's protection for him at school — and validation that his rights matter."

After playing clips from Mrs. Lemay and from her 2015 interview of her child, Snow pointed out that "in Jacob's home state of Massachusetts, the state legislature just yesterday passed a bill banning discrimination against transgender people. But in other states across the country today, there was backlash against the federal government." The journalist did include a soundbite from Jeremy Tedesco of the conservative Alliance Defending Freedom, who disclosed that "parents and students feel intimidated by their school districts." However, she followed this with a clip from Jay Brown of the leftist Human Rights Campaign, who hyped the Obama administration's directive as "another part of that long march toward equality." 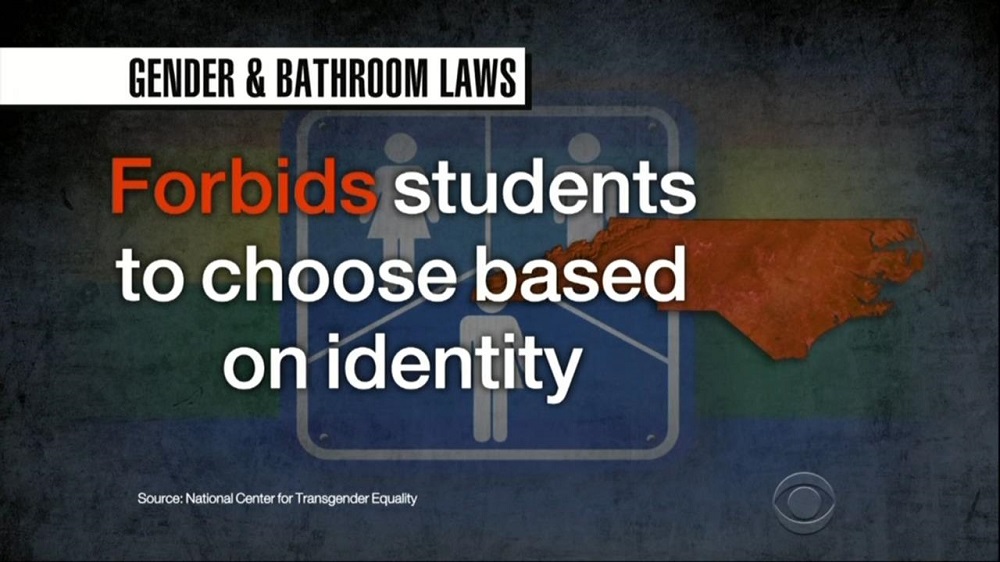 Manuel Bojorquez devoted his report on CBS Evening News to spotlighting the debate over a similar local policy in Fort Worth, Texas.  Borjorquez included snippets from opponents from a recent school board meeting, and played a soundbite from a mother who contended that "it's not a federal decision. This is a state — and this is a local decision." He also featured clips from the school superintendent and a former city councilman, who both support the pro-transgender policy. However, an on-screen graphic cited data from the pro-LGBT National Center for Transgender Equality [see screen cap at right].

On World News Tonight, ABC's Steve Osunsami zeroed in on the opposition to pro-transgender policies in school districts in Georgia and South Carolina. Osunsami included two soundbites from opponents of such policies, and three from transgender students and their supporters. He ended his report by highlighting that "these guidelines aren't law, but there's fear the federal government could withhold funds if the school districts don't take them seriously."

The full transcripts of Kate Snow's report from NBC Nightly News, Manuel Bojoquez's report from CBS Evening News, and Steve Osunsami's report from ABC's World News Tonight — all of which aired on May 13, 2016:

THOMAS ROBERTS: Pushback is coming fast and furious tonight against the Obama administration's historic new directive to the nation's public schools. It is a sweeping policy change to accommodate transgender students, which would allow kids to use the bathroom and facilities of the gender they identify with. The guidance is not legally binding, but could lead to a cut in federal funding to districts that don't comply.

KATE SNOW: For kids like Jacob Lemay, the guidance that students should use the bathroom of their gender identity isn't just some abstract policy. His mom, Mimi, says it's protection for him at school — and validation that his rights matter.

MIMI LEMAY: When I send Jacob off to school, I want to make sure that he's treated the same way as any other student — that he can use the facilities he's comfortable with. This means a lot to us.

SNOW: We first met Jacob a year ago, just after he transitioned to living as a boy at four years old.

MIA "JACOB" LEMAY: I wanted to be a boy.

SNOW: Yeah? What did you say to your mom and dad?

SNOW (voice-over): In Jacob's home state of Massachusetts, the state legislature just yesterday passed a bill banning discrimination against transgender people. But in other states across the country today, there was backlash against the federal government — Arkansas, Mississippi, and Texas telling schools to disregard the guidance.

DAN PATRICK, LIEUTENANT GOVERNOR OF TEXAS (from press conference): Well, in Texas, he can keep his 30 pieces of silver. We will not yield to blackmail.

SNOW: And outside Chicago, 51 families are suing a school district for allowing a transgender student to use the girls' bathroom.

SNOW: The White House says the new directives were issued after a growing number of school districts asked for guidance. But advocates for LGBT rights say what happened today goes far beyond bathrooms.

JAY BROWN, HUMAN RIGHTS CAMPAIGN COMMUNICATIONS DIR.: It was just last June that we won marriage equality at the Supreme Court. This week is another part of that long march toward equality.

SNOW: For Jacob, who's now six, it could be a turning point that shapes how he's treated for the rest of his life. Kate Snow, NBC News, New York.

SCOTT PELLEY: Well, today, the Obama administration directed public schools to give transgender students access to bathrooms that match their new gender identity. The reaction to this was mixed. And Manuel Bojorquez picks up our story in Texas.

DAN PATRICK, TEXAS LIEUTENANT GOVERNOR (from press conference): We will not yield to blackmail from the President of the United States.

UNIDENTIFIED WOMAN 1 (from school board meeting): Why can't parents and the public have input on this policy?

UNIDENTIFIED MAN 1: When we err on the side of fear, we amplify hysteria.

BOJORQUEZ: The issue had already boiled over in Fort Worth, after the state's fifth largest school district said it would enforce a policy which includes letting transgender students choose the restroom they use — regardless of their gender at birth.

UNIDENTIFIED WOMAN 1: Taxpayers and parents should be outraged at this shocking violation and breach of the public trust. Get back to education; repeal the policies. (audience members cheer and applaud)

BOJORQUEZ: The superintendent, Kent Scribner, said the policy was aimed at preventing bullying.

KENT SCRIBNER, FORT WORTH INDEPENDENT SCHOOL DISTRICT SUPERINTENDENT (from school board meeting): Unfortunately, not every child comes from a safe and supportive home.

BOJORQUEZ: It's the latest battle, as school districts across the country decide how to accommodate transgender students. Eight states, plus the District of Columbia, have laws regarding gender and bathroom use. Only two — California and New Jersey — specifically allow students to choose a restroom based on their gender identity. North Carolina forbids it.

UNIDENTIFIED MAN 2 (from school board meeting): You're a mockery to democracy!

BOJORQUEZ: In Fort Worth, the new federal guidelines seemed to intensify the debate, rather than settle it. Allison Kelly has two children in public schools here.

ALLISON KELLY: It's not a federal decision. This is a state — and this is a local decision.

JOEL BURNS: So I'm happy that the federal government is stepping in to make sure that all kids have a safe place to go to school.

BOJORQUEZ (on-camera): Texas public schools receive more than $6 billion a year in federal funds. Scott, today, the lieutenant governor said he is willing to forgo that for the sake of this fight.

PELLEY: Manuel Bojorquez for us tonight — Manuel, thanks.

TOM LLAMAS: Now to the heated debate spreading across the country tonight — President Obama weighing in on the treatment of transgendered children at school; the White House now directing every public school to allow students to use bathrooms and locker rooms consistent with their gender identity — opposing reaction fast and fierce. And ABC's Steve Osunsami with students caught in the middle of a national issue.

STEVE OSUNSAMI (voice-over): North of Atlanta, where one school district is already considering these federal guidelines, some parents are threatening to pull their kids from class.

UNIDENTIFIED WOMAN 1 (from school board meeting): They will never set foot in a Fannin County school again. I will stay home every day and homeschool.

OSUNSAMI: The district is calling for unisex bathrooms, to accommodate transgender students, or letting them choose the bathroom they need.

UNIDENTIFIED MAN 1: This is about a fear for — not having federal funding.

OSUNSAMI: Even a middle-schooler spoke up at this crowded debate.

UNIDENTIFIED FEMALE STUDENT (from school board meeting): We shouldn't judge them, because — or discriminate them (sic).

OSUNSAMI: Xavier Eaton, who's transgender, graduated from the school.

XAVIER EATON: I was beaten up by two males who said that if I wanted to look like a guy, they would treat me like a guy.

OSUNSAMI: The feelings are just as strong in Moncks Corner, South Carolina.

UNIDENTIFIED WOMAN 2: It should not be in the primary school system.

OSUNSAMI: Sera Guerry is a sophomore, and says the best day of her life was when the principal told her she could use the girls' bathroom.

SERA GUERRY: Before I came out at Berkeley, nobody knew; so I didn't want to compromise that and go to the staff restroom.

LLAMAS: An issue so many are following tonight — all right, Steve. Thank you.