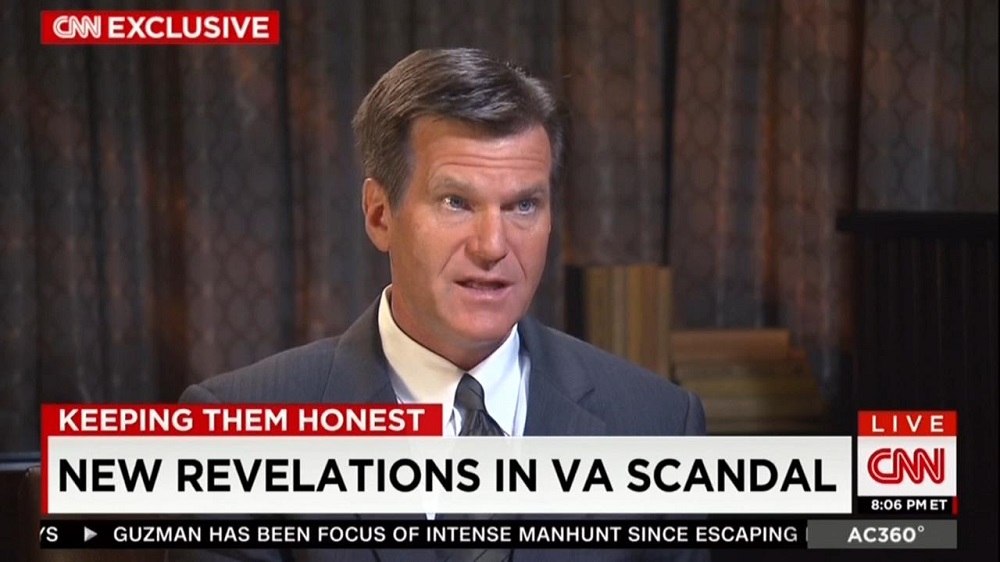 Tuesday's Anderson Cooper 360 on CNN revealed that "wait times inside many V.A. health facilities are growing longer, not shorter. Right now, a half million veterans are...waiting, in many cases, more than 90 days to see a doctor." Drew Griffin uncovered documents that "just this past August in Phoenix, there were more than 8,000 appointments waiting more than 90 days." Griffin pointed out that this is "the same Phoenix V.A. where last year, CNN uncovered the fact that veterans were dying while waiting for care." [video below]

The correspondent also spotlighted that in Los Angeles, "the largest V.A. facility in the nation, this document obtained by CNN shows an August average wait time  for new patients in mental health was 43 days. Publicly, the V.A. claims the wait was less than four days. How can there be two different numbers? The V.A. changed the way it calculates wait times." Griffin also revealed that some V.A. managers were still targeting whistleblowers for investigation; and that since the original scandal, only three senior executives at the executive branch have been fired.

Host Anderson Cooper noted in his introduction to the October 20, 2015 segment that "our previous reporting, as you may recall, helped sparked investigations; apologies; and ultimately, the resignation of V.A. Secretary Eric Shinseki. But even after all that, according to new documents obtained by CNN, wait times inside many V.A. health facilities are growing longer, not shorter."

Griffin first played two clips from an anonymous whistleblower from Phoenix who "like most of our sources inside the V.A....asked we not reveal any identity." The federal employee asserted that "veterans are waiting months — three, six months at a time — sometimes more — for care at the Phoenix V.A.," and that these patients were waiting for "everything from colonoscopies to angiograms to procedures to actually remove tumors. These are specialty appointments that need to be seen immediately by the V.A."

The CNN journalist also featured several excerpts from his extended interview of Veterans Affairs Deputy Secretary Sloan Gibson. Griffin grilled Gibson over the documents that his network obtained about the ongoing wait times:

DREW GRIFFIN (on-camera): The Phoenix V.A. — center of this whole thing — I'm going to let you look at that for just a second. It shows more than 8,000 patients waiting more than 90 days for an appointment. Now, explain to me that — what this is; and if that's true, how could it be?

SLOAN GIBSON, DEPUTY SECRETARY OF VETERANS AFFAIRS: What you're looking at is something that's called an open consults' report. That's going to include instances where care has already been delivered, but there may be some administrative issue that hasn't been corrected yet that allows the consult beat to be removed.

GRIFFIN: Does it necessarily mean that 8,000 patients are not waiting 90 days?

GIBSON: I would say, patently, it means there are not 8,000 patients — not waiting 90 days. Are there some patients waiting longer than they should be waiting? Yes, there are.

GRIFFIN: And how can you guarantee – I mean, how could you make a statement so strongly that — that they're not?

GIBSON: I'm saying some of them are not, because—

GRIFFIN: Some of them are not, but I mean—

GIBSON: Because I know—

GRIFFIN: Do you know how many are not?

GIBSON: The pending appointments over 30 days, plus the electronic wait list is almost 500,000 today. How can it be? And the lesson that we've seen in location after location, is when we improve access to care — whether it's by adding staff or space or productivity or care in the community, more veterans come to V.A. for more care.

GRIFFIN: Well, you're saying that you're a victim of your own success.

GIBSON: I would say the challenge that we have is a structural challenge.

GRIFFIN: So when — our sources, who are telling us — you know, the reality is the veterans are waiting months, you would say?

GIBSON: I would say we work every single day trying to find ways to make it better. I know, as you've shown right there, we've got veterans waiting too long for care.

GRIFFIN (on-camera): The staff who are telling us that what they think they are seeing is recalculations, number manipulations, to paint a rosier picture than it is.

GIBSON: Absolutely not. I wouldn't stand for it — not for a minute.

GRIFFIN (voice-over): The new leadership at the V.A. says it will also not stand for any retaliation against the whistleblowers who come forward to point out where veterans are being treated unfairly. But in preparing this report, CNN has learned V.A. managers were already searching for a leak.

GIBSON: And there — there should not have been investigations, period. I have made it clear more times than I can count, in every form that I can — that I can come up with, that retaliation against whistleblowers won't be tolerated.

The correspondent also included two soundbites from one of the original whistleblowers from the Phoenix V.A., who underlined that the culture inside the bureaucracy has not changed much, if at all:

GRIFFIN (voice-over): Dr. Katherine Mitchell, one of the original V.A. whistleblowers in Phoenix, says lifelong bureaucrats managing the V.A. know they will not be fired — which is why many in the V.A. have chosen to keep their mouths shut.

DR. KATHERINE MITCHELL, PHOENIX VA WHISTLEBLOWER: The people that retaliated against people that spoke up — those administrators are still there.

GRIFFIN: Congress, which passed a law making it easier for the V.A. to fire bad managers, has also criticized the V.A.'s new leadership for, so far, only firing three senior executives.

Griffin also confronted Gibson over the lack of punishments of managers and executives at the V.A.:

GIBSON: I don't have a specific number of people that were specifically disciplined associated with the waitlist scandal. The criminal I.G. has gone and investigated, and concluded that there was no misconduct, no malintent. This was just somebody that didn't understand their job.

GRIFFIN: But the managers of those people, obviously, were not doing a good — I mean, you're from private business! I don't have to tell you that—

GIBSON: We had — we had managers—

GRIFFIN: You have managers and supervisors who have not done their job—

GIBSON: We had managers that didn't understand how to do scheduling either—

GRIFFIN: So maybe they shouldn't be managers?

GIBSON: And so — well, and — maybe, they shouldn't be. More than 50 percent of our senior leaders in V.H.A. [Veterans Health Administration] have turned over in the last 24 months.

GRIFFIN (voice-over): Congressional and V.A. sources remain unconvinced at just how much really has changed since the scandal, except the way the V.A. management recalculates its wait times — which, according to Dr. Katherine Mitchell, still do not tell the whole truth.

GRIFFIN (on-camera): Do you think, based on your knowledge of the — how the system works — that veterans are still dying waiting for care?

MITCHELL: No hesitation at all.

At the end of the segment, Cooper himself wondered about the lack of paltry number of firings:

COOPER: And after all of this, why have just three senior executives been fired? I mean, didn't Congress make it easier for the V.A. to actually fire people?

GRIFFIN: It is easier, yes, but it is still not easy. You know two managers removed from the Phoenix V.A. in the wake of that scandal? They're still on paid leave. It's been like 18 months. Sloan Gibson and Secretary Bob McDonald — I can sense their frustration. They're from the private sector. They're trying to manage this bureaucracy, Anderson. It is — it is really out of control, according to our sources. They're having a tough time firing poor performers. So, what they try to do is move them around —move them into positions where they can't do any harm — but it is not easy.