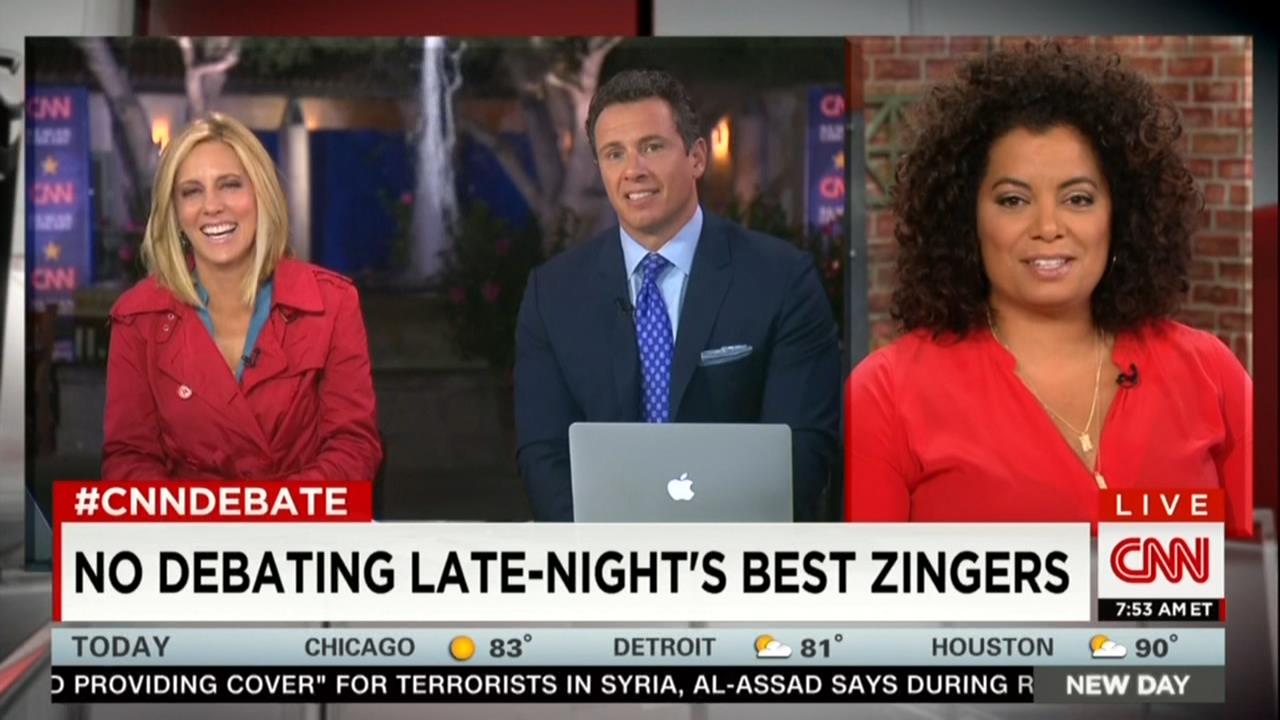 Wednesday's New Day boosted Jimmy Fallon's anti-Dick Cheney crack from hours earlier on NBC's Tonight Show. Fallon spotlighted how Bernie Sanders was "concerned about what he called 'war talk' coming from the Republicans," and added, "Yeah, 'war talk' – or, as Dick Cheney calls it, 'phone sex.'" The CNN morning newscast included the line in a video round-up of late night shows' jabs at Republicans. Anchor Alisyn Camerota laughed at the compilation, and when asked which was her favorite, she replied, "I like the 'phone sex' one." [video below]

The video round-up included two one-liners from Fallon, a clip from NBC's Seth Meyers, and one from TBS's Conan O'Brien. An on-screen graphic highlighted how "Fallon Takes Jabs at Bush & Sanders." However, the clip about Sanders didn't actually target the Democratic socialist presidential candidate, but Cheney instead.

Co-anchor Michaela Pereira zeroed in on the reaction from Fallon's audience regarding Sanders: "Did you notice the round of applause for Bernie Sanders from the Fallon audience there?" Fellow anchor Chris Cuomo replied, "Oh, yeah. Well, that's his group. I mean, he's doing very well with young lefties, and there are a lot in that crowd for sure."

This isn't the first time that Camerota and Cuomo have yucked it up over liberal comedians' punchlines targeting Republicans. Back in July 2015, the two anchors hyped how David Letterman mocked Donald Trump in a Top Ten list. Camerota exclaimed, "We do miss David Letterman!" Cuomo added, "We miss the social critique. It will be interesting to see who picks up the mantle."

The transcript of the segment from Wednesday's New Day on CNN:

MICHAELA PEREIRA: Well, no detail of the presidential race is immune from becoming a punchline – and that includes tonight's CNN debate. In case you were asleep, let's give you some of the late-night zingers. You guys ready?

JIMMY FALLON (from NBC's The Tonight Show Starring Jimmy Fallon): I read that Jeb Bush has seen a drop in campaign donations lately. He's been forced to take commercial flights to campaign events. (audience groans) It got weird when the airline said they lost Jeb's baggage. And he was like, 'You lost my brother?' (audience laughs)

PEREIRA: (Camerota laughs) All right, guys, who gets the laugh – the laugh win this time?

CHRIS CUOMO: Of course, you do-

PEREIRA: It was pretty good, and did you notice also-

CAMEROTA: It's too early for your humor, Chris Cuomo-

PEREIRA: Did you notice the round of applause for Bernie Sanders from the Fallon audience there?

CUOMO: Oh, yeah. Well, that's his group. I mean, he's doing very well with young lefties, and there are a lot in that crowd for sure.

PEREIRA: Not this time-

CAMEROTA: We'll work on that. Thanks so much, Michaela, for the levity. We love that.