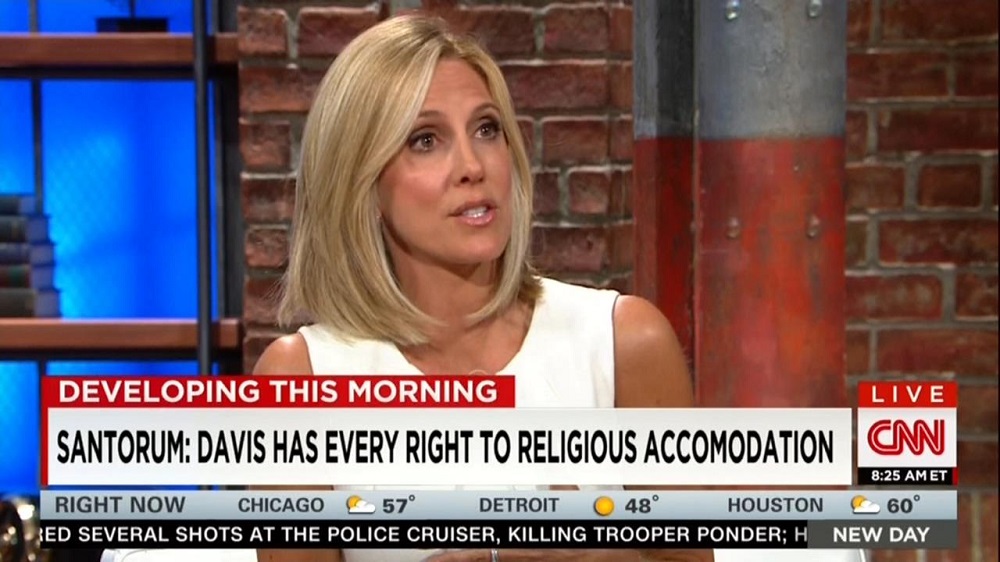 On Monday's New Day, CNN's Alisyn Camerota hounded Republican presidential candidate Rick Santorum, after he suggested that Kim Davis should "follow her conscience" in refusing to sign marriage licenses for same-sex couples. Camerota underlined how the Supreme Court "decided...that not allowing gay marriage is discrimination," and asserted that "there are lots of laws that you yourself don't agree with, but you follow the law. That's what we do as Americans." She later added, "Do we have a country, if everyone acts on their own individual, personal religious beliefs, and decides not to follow certain laws?" [video below]

Camerota led the interview with the ongoing Kim Davis controversy. She first asked Santorum, "What would you advise Kim Davis to do this morning?" The former senator replied with his "follow her conscience" advice, and continued, in part, that "the Supreme Court decision really made no provision as to what county clerks should do. In fact, they...wrote extensively about how, after this decision, there had to be accommodations." He also called on the State of Kentucky and Congress to pass "things like the First Amendment Defense Act, which does provide for accommodations for people both in government and outside of government who have religious convictions that differ with the Court ruling."

The CNN anchor responded with her "discrimination" statement, which led to extended exchange over religious liberty:

CAMEROTA: Listen – listen, Senator. I mean, my point is this: I'm sure there are lots of laws that you yourself don't agree with, but you follow the law. That's what we do as Americans.

SANTORUM: Well, number one, because the Supreme Court says something doesn't necessarily mean it's a law of the land. It's – my belief is when the Supreme Court acts beyond their constitutional authority, then we have every obligation to fight that – fight that. And I think, if you look at Justice Roberts's opinion, he said there's no constitutional basis for this decision – that the Court acted beyond its authority. I think it's the responsibility – principally of the Congress and the President – to push back when the Court – that's called checks and balances. When the Court exceeds its authority, the Congress and the Senate – the Congress, excuse me, and the President should push back-

CAMEROTA: Sure, and there's a process for that. I mean, yes-

CAMEROTA: The Congress can go through passing its own legislation. There's a process. But at the moment today, the Supreme Court has decreed the law of the land, and she is defying it. I mean, do we have a country, if everyone acts on their own individual, personal religious beliefs, and decides not to follow certain laws?

SANTORUM: Again, the Supreme Court made a decision about same-sex marriage – again, which I believe was beyond their authority to do so. But it did not provide anything that Kim Davis had to issue a marriage license. It said, very clearly, that there had to be accommodations provided for people of faith. And what – what – Kim Davis was not cited for violating the Supreme Court decision. She was – she was cited in contempt of court of one judge deciding that this is what the Supreme Court required-

SANTORUM: That's why she's asking for Kentucky to step in and to do what they should do – which is clarify what the obligations are in the State of Kentucky.

CAMEROTA: Okay. So if you were the governor of Kentucky today, would you take her name off the marriage licenses, as she's asking? Would you force her to resign? What would you do?

SANTORUM: I would take her – I would accommodate her religious convictions, allow the – you know, allow the process to go forward.

This isn't the first time that Camerota has hounded a Republican politician on the marriage issue. Back in May 2015, she acted more like a LGBT activist than a journalist during an interview of Texas Attorney General Ken Paxton. The anchor touted a statement from socially left-wing group Lambda that attacked a proposed marriage bill in Texas as "blatantly discriminatory." She then asked, "Isn't it discriminatory? Aren't you saying that the gays and lesbians in your state are not as valued as heterosexuals because they can't form into a union?"