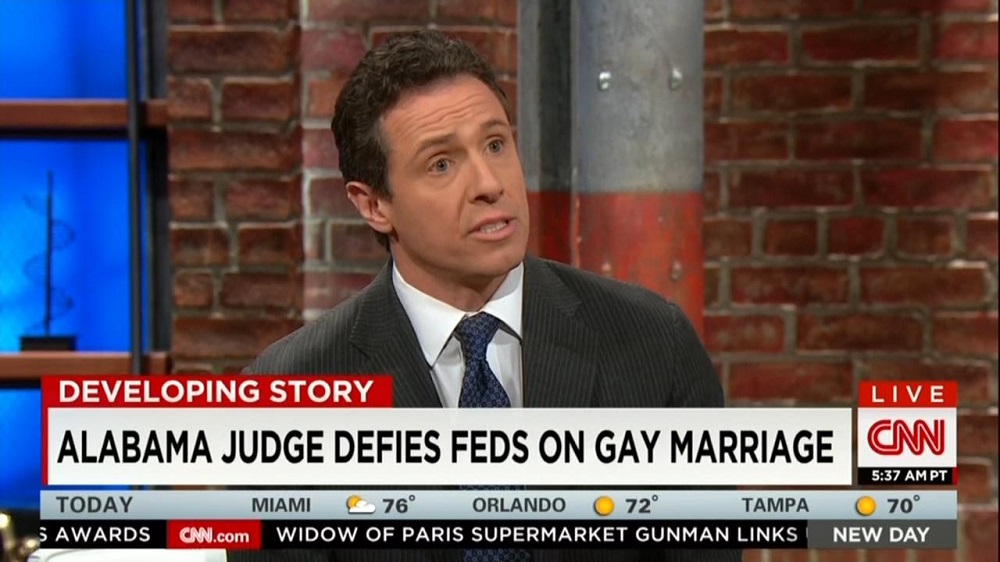 On Thursday's New Day, liberal CNN anchor Chris Cuomo hammered Alabama Supreme Court Chief Justice Roy Moore over his resistance to same-sex "marriage." Cuomo forwarded many of the talking points of the social left during the long segment: "It used to be legal to have slaves. Your state had a lot of laws on the books, like other states, where times changed, and those laws had to change. And this is another example of that." He also asserted that Alabama "created a constitutional amendment that, by design, discriminated against gay people."

Later in the confrontational interview, Justice Moore underlined that "our rights contained in the Bill of Rights do not come from the Constitution. They come from God." The anchor blasted back that this was not the case: [video below]

CHRIS CUOMO: Our laws do not come from God, your honor, and you know that. They come from man.

CUOMO: You would call it organic law as a basis for future laws off of it?

CUOMO: Our rights do not come from God. That's your faith. That's my faith. But that's not our country. Our laws come from collective agreement and compromise.

MOORE: It's not a matter of a faith, sir. It's not a matter of faith, sir. It's a matter of organic law, which states, 'We hold these truths to be self-evident that all men are held equal and endowed by their creator with certain inalienable rights, that among these are life, liberty, and the pursuit of happiness.' And the only role of government is stated in the next sentence: 'is to secure those rights for us.' When government starts taking those rights away from us, then it's not securing it for us. It is violating the whole purpose of government.

Cuomo first delivered his slanted take on Alabama's state constitutional amendment on marriage five minutes into the twenty-five minute interview. Justice Moore replied by citing the Declaration of Independence (as he did later in the interview), as well as the Supreme Court's 1967 decision which legalized interracial marriage:

CUOMO: ...We are a nation of laws and not just God's law. And what your state did in 2006 was what many did – which was, you tried to define marriage to exclude. And what happened in U.S. v. Windsor – the case that is on everybody's lips now because it changed it – is that those laws that define marriage as only between a man and a woman are unfair, and fail the test of equal protection. You know that. You know that when they meet this spring, many people believe the Supreme Court will affirm this, and say that state laws and constitutional provisions like your own are unfair. The question is, why won't you accept that definition of marriage?

MOORE: ...I don't believe they have the right to push upon the state a definition which this state does not recognize – indeed, which the United States Constitution does not recognize. In fact, in Loving versus Virginia in 1967, when they declared that interracial marriages could not be prohibited – correctly so – they referenced marriage as the right of free men and women to enter into pursuit of happiness. They quoted basically out of the Declaration of Independence, which said that God gave us these rights: 'We hold these truths to be self-evident; that all men are created equal and endowed by their creator with certain unalienable rights; and among these are life, liberty, and the pursuit of happiness.' They're unalienable because they can't be taken away, and they can't be mandated on the state in this instance.

The CNN anchor retorted with his "it used to be legal to have slaves" line. He injected his repeated "discrimination" labeling of the amendment a few minutes later:

CUOMO: ...[T]his is exactly how the discrimination got removed in states like yours: district courts putting through rulings that the states then had to enact.

CUOMO: It's about discrimination.

CUOMO: It's about discrimination.

MOORE: Being – overcoming an institution which has existed in our state – in our United States – for centuries, and I think it's wrong.

CUOMO: But it's about discrimination. In 2006, you created a constitutional amendment that, by design, discriminated against gay people. And now, you are being told by the federal law that is wrong.

MOORE: Again – again – again, that is the constitutional amendment to the Alabama constitution, and it's clearly within the bounds of state law and federal law. Again, there is nothing in the Constitution about marriage. How can judges go in and define a word? They're doing exactly what they did in 1857 in Dred Scott-

CUOMO: They just did it in U.S. v. Windsor. They just looked at the Defense of Marriage Act, and said you cannot define marriage as just between a man and woman-

MOORE: That was between Congress. It did not affect the state, according to the ruling in Windsor.

CUOMO: But you can't say that the Court hasn't spoken about it. It was the exact same issue. It just wasn't a state law, and that's why we're having the next case in June-

CUOMO: That's right, because of the specific issue before them. And now, they're meeting again in June. And if June comes and they hold the same way, then what will you do?

CUOMO: If the Supreme Court causes it to be stare decisis – and we both know what that means, the case is decided – and the law is that you cannot discriminate against people on the basis of their sexual orientation in marriage, you will be – you will have to follow it.

Moments before he made his "our rights do not come from God" statement, Cuomo insisted that the matter was relevant to the Supreme Court due to equal protection. He also repeated his likening of the marriage issue to slavery:

CUOMO: So you think that gay marriage is wrong, right? Just say it.

MOORE: I think that gay marriage is an alteration of the definition of marriage, and the United States Supreme Court does not have the authority – or the federal courts do not have the authority – to interpret a word that disputes the Constitution. The Tenth Amendment is very clear. The power is not delegated to the United States by the Constitution, nor prohibited by it to the states, are reserved to the states respectively.

CUOMO: Is equal protection a matter for the Supreme Court?

MOORE: This is one of the ways it's reserved for the states.

CUOMO: Is equal protection a matter for the Supreme Court? The answer is, of course, yes, as guaranteed in the Fifth Amendment. That's what this is. Go ahead, your honor.

MOORE: And so does an equal application of the law. Every person in this country and in this state has a right to marry a person of the opposite sex, according to the original definition of marriage-

CUOMO: And why not extend it to the same sex? Why isn't – that's clearly within the bounds of a reckoning of equal protection-

MOORE: Because that's not in the definition-

CUOMO: Why not do that?

MOORE: That's not in historical definition of marriage; never has been. It's going to be created if it is created, which I do not believe it should be or would be.

CUOMO: Well, you don't believe that as a matter of personal opinion, right? But times change; definitions change. We didn't think blacks were equal to whites. That changed.

Later in the segment, the CNN anchor claimed that Justice Moore was imposing his religion on the people of Alabama:

CUOMO: You don't feel that you are sacrificing-

MOORE: It's not about feeling.

CUOMO: When you take the rules of your religion and you put them on everybody else, that is not what we do in this country. Your definition of marriage is based on your faith. You've said it a hundred times that it is derived from God. That is not how it works here, and you know that. Equal protection applies to all by compromise, and you would need to even have a rational basis for why it can only be between a man and a woman, and all you can say is because God says so. It's always been that way. That's not enough.

MOORE: I've never – are you going to let me answer?

MOORE: Okay. I've never said that's about my faith and it's about my religion. It is not, as a matter of fact. It's about the organic law of our country, which states very clearly that our rights; our pursuit of happiness, quoted in Loving versus Virginia, come from God. Now, God gave us that definition and that definition has remained in America for many, many centuries till – for two centuries and even before that till just recently. Now, I'm just simply saying the people of Alabama have a right to put in their constitution that marriage is between a man and a woman. That doesn't dispute anything.