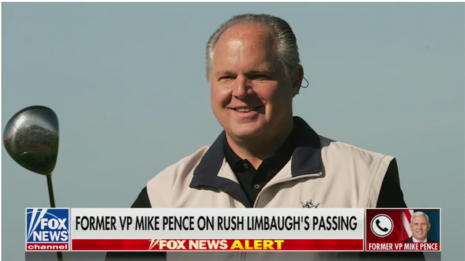 The death of legendary conservative talk radio host Rush Limbaugh as a result of advanced stage lung cancer is one of the most tragic stories of the year. There’s no denying his massive impact on broadcasting history. Shortly after his death, former vice president Mike Pence honored him on Fox News Channel as the "anchor of conservatism."

Now Pence will narrate a four-part documentary honoring Rush's life and legacy for the popular cable news channel’s subscription-based streaming service, Fox Nation, which debuts on March 10. According to a recent Fox press release, the documentary will be presented in four parts:

Act One: The Spoken Word

A college drop-out, local disc-jockey Rush Limbaugh gets his big break when he lands his own radio show. Little does he, or anyone else for that matter, know that Limbaugh was poised to take radio by storm, changing the industry and American politics forever.

In 1994, as Limbaugh’s daily radio show reaches a listening audience of unprecedented size, he takes on the new role of field general for the “Republican Revolution.”

As Limbaugh battles struggles both personal and professional, a new breed of the Republican Party emerges after President Obama takes office

After 30 years on air, “The Rush Limbaugh Show” continues to dominate the airwaves, until an unexpected announcement from its host shocks the world.

On a personal note, I started listening to him when I was in college, two months after Barack Obama won the 2012 presidential election. And I found him very entertaining to listen to over the years, despite all the controversies generated by the liberal media. His success would eventually lead to other political talk shows on the radio, including conservative hosts like Mark Levin, Sean Hannity, and Laura Ingraham -- all of which also are hosts on the Murdoch-owned Fox News Channel (which, if you think about it, follows the tradition of the newsreels made by the now Disney-owned film studio it was once named after).

It’ll be interesting to see Fox Nation’s take on Limbaugh’s legacy. Not to mention that it has such a great lineup of guests, including former House speaker Newt Gingrich, MediaBuzz host Howard Kurtz, and even Limbaugh’s executive producer Bo Snerdley. Limbaugh got a lot of flack over the years, even after his death. And even in the liberal attempts at a radio counter-revolution failed (like the progressive-leaning radio network Air America), there’s no denying his deep impact on modern American history.