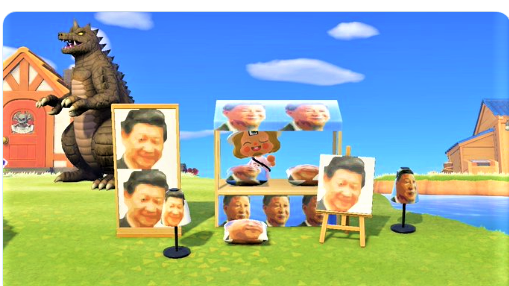 Nintendo’s new social simulation video game Animal Crossing: New Horizons, which is out now for the Switch console, has become incredibly popular thanks to the COVID-19 outbreak causing people to stay home – selling over 3 million copies worldwide so far. In Japan (where numbers are increasing in urban areas, one of the factors that caused a one-year delay of the Tokyo 2020 Olympics), its sales have even surpassed those of the recent titles in the Pokémon franchise, Pokémon Sword and Shield.

One of the reasons why the game (part of the long-running Animal Crossing franchise) became so successful is because it offers much-needed escapism in a time of the uncertainty caused by the pandemic. Quite fitting, since it’s set on a tropical island. On a personal note, I bought the game at the time of release, and it’s a very relaxing title to play, almost as soothing as an episode of The Joy of Painting with Bob Ross – a far-cry from online Battle Royale titles like Fortnite and a lot of the ultra-violent games that are popular with audiences today (it’s a Nintendo video game after all, so you should expect it to be more family friendly).

However, communist China (where the new Animal Crossing has not been released as of yet) is now trying to take the fun out of the game by banning sales of it there, and it's all thanks to the pro-democracy protesters in Hong Kong using the game as a platform to get their dissident message across. The far-left UK newspaper The Guardian reports:

The game allows users to decorate their game environment with a pattern creation tool, which some players have used to create politically sensitive images and slogans which they screenshot and share on social media. Some posts related to the pro-democracy movement in Hong Kong and attacked chief executive Carrie Lam, and Chinese president Xi Jinping.

To give an example of what the report has seen, check out this tweet from Hong Kong protest leader Joshua Wong, which reads:

This is what we do in #AnimalCrossing… maybe it’s why these people are so anxious to go back into the game!! 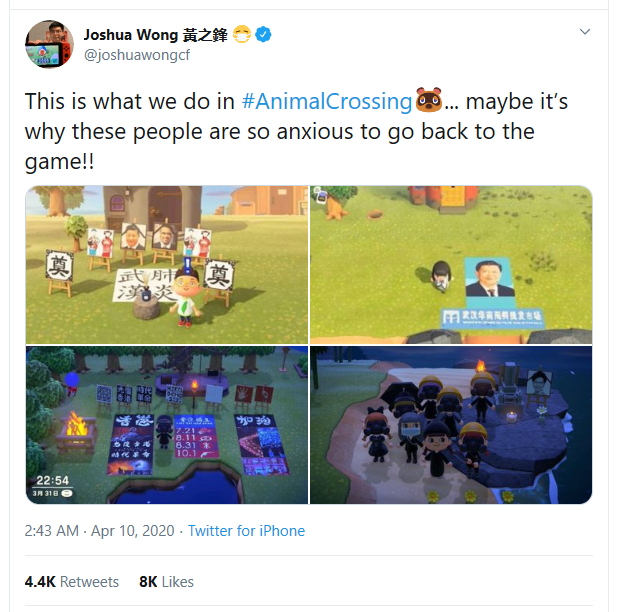 It’s hard to believe Red China would ban sales of a video game just because individual users such as Wong are using it for their own cause. Doing that is no better than video game companies themselves using their work to spew out unnecessary social justice messages, but banning sales of a video game due to either of these things is worse, and that’s exactly what China is doing. Typical of a totalitarian regime.

The pro-democracy movement was put on the map last summer with the chaos and violence that went on in Hong Kong from June of last year to mid-January, when the coronavirus began its wrath throughout the world. Although I disagree with them pulling a stunt like this, you can’t deny how much they don’t want their lives to be controlled this way. When China took control of Hong Kong from the United Kingdom in the 1990’s, it was supposed to be a one-country two-systems sort of deal. Under the leadership of Xi Jinping, however, China has taken its authority too far.

People like Wong are being suppressed by the Chinese Communist Party, which led to the violence that occurred last year. And even with the COVID-19 pandemic putting the protests to a grinding halt, they still want their voices heard. And that’s exactly why they’re using a video game like Animal Crossing: New Horizons as a platform.

As much as I disagree with Joshua Wong and other Hong Kong protesters doing this, I totally understand where they’re coming from and continue to support their cause. And hopefully they’ll continue to send a message to the Mainland Chinese totalitarians that have destroyed so many lives and caused others to get sick and – in many cases – die thanks to their dishonesty about this contagion.

As for myself and other fans, we’re still going to use this game for what it was meant to be… relaxing escapism from tough times.