Gag me with a lobster claw.

Donald Trump might have turned down Joe and Mika's importuning for an invitation, but Joe Biden was a lot more amenable.

On today's Morning Joe, Scarborough and Brzezinski revealed that they had attended last night's state dinner, Biden's first as president, in honor of visiting French president Emmanuel Macron. Forget any notion that journalists should maybe avoid going to White House dinners so they can appear as nonpartisan as they can. No no, when you can brag about your important place in the elite, that's most important.

As has been reported, Joe and Mika were there not as journalists covering the event, but as "guests," i.e., official Biden fankids. Predictably, the pair gushed this morning over the event, calling it "beautiful," "lovely," and "very joyful.'

Scarborough told his guests "Joe Biden gets up, talks about the sort of things that all presidents have talked about, but really hasn't had the resonance, because you've heard it so many times. Being for freedom, for liberal democracy. He talked about all of these values." Is that what all the climate-change dictates are, a sign of "freedom"? Or the EU warning Elon Musk they'll dump Twitter if there's no "hate speech" crackdown?

Then, in a swipe at conservatives, Joe and Mika reserved emotional praise for Macron's line that the "fight for democracy" is taking place not only in Ukraine, but "in our own countries." Democracy was on the ballot—take that, Republicans! Take that, Kevin McCarthy -- who attended the dinner. And leaving no doubt at whom Macron's line was aimed, Mika mentioned that "everybody started clapping."

"Everybody": as in, all the dutiful members of the liberal claque. 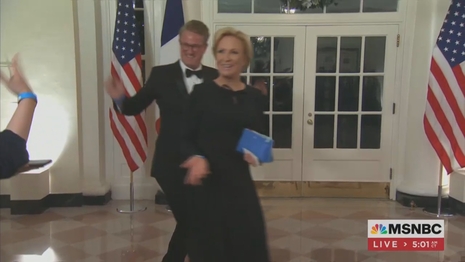 So, now that Joe and Mika have been officially ensconced as Biden courtiers, look to Morning Joe for even more pronounced pro-Democrat sycophancy, and denunciations of those ee-vil Republicans!

Note: It was also telling that Scarborough said, "it was great to have everybody back." Meaning, the usual suspects of liberal politicians, journalists, and celebrities.

MIKA BRZEZINSKI: And Congress passes last-minute legislation to keep railways moving. So what happened to the request from workers concerning paid sick leave? We'll have the latest on that.

JOE SCARBOROUGH: Were you thinking about calling out for sick leave today? I was.

MIKA: We were out very late last night.

SCARBOROUGH: For us, late.

MIKA: We're never out, and we were out late.

SCARBOROUGH: Watching Wheel of Fortune, and then going to sleep. And then, something's wrong.

MIKA: It was a lovely evening at the state dinner with French President Emmanuel Macron, and it was just beautiful. And I kind of can't remember an event like this at the White House for about six years, really. Given Covid, and then, obviously, the Trump years. But it was very joyful.

SCARBOROUGH: It was very, it was joyful. It was great to have everybody back. I mean, it was a little late for my tastes.

When they got up and gave the [inaudible.]

MIKA: The speech, the toasts.

SCARBOROUGH: It was a real moment, the toasts. It was another one of those surreal moments where for a second you stop and say, wait second, we're in an extraordinary time.

Joe Biden gets up, talks about the sort of things that all presidents have talked about, but really hasn't had the resonance, because you've heard it so many times. Being for freedom, for liberal democracy. He talked about all of these values.

And then Macron got up --

SCARBOROUGH: -- basically reiterated it, and said, I'm holding in my hand the Constitution, and talks about liberal democracy.

SCARBOROUGH: We the people. And I just,

MIKA: And everybody started clapping.

MIKA: It was beautiful.