How all-in has Michael Steele gone for the Democrats? As his comments on Ali Velshi’s MSNBC show on Saturday demonstrated, the answer is, very all-in! Steele is the former chairman of the Republican National Committee, turned Never Trumper, MSNBC analyst, and eventually, member of the disgraced Lincoln Project.

The subject was the efforts by Democrats to meddle in Republican primaries by promoting MAGA/Trump-supporters, whom the Dems assume would be easier to defeat in the general election with the latest example being Michigan's third congressional district with Democrats pumping money in to promote John Gibbs, an ardent Trump supporter over incumbent Congressman Peter Meijer, who had voted to impeach the President in 2021.

It's a mark of just how far Steele has gone that whereas co-panelist Jennifer Rubin — she a certified detester of the GOP — wasn't completely on board. While she expressed uneasiness, she seemed to have come around, insisting Republicans who voted to impeach Trump and believe Biden is the legitimate President are still worth defeating if they back Kevin McCarthy for Speaker:

It was nice that [Meijer] voted for impeachment. That's great, but until these people foreswear the party itself -- until they say, "I'm not going to put a person like Kevin McCarthy, who is completely loyal to Donald Trump, in a person of authority -- I think that's fair game and I don't think Republicans should be voting for "good Republicans" if those "good Republicans" are going to turn around and empower those MAGA forces.

In contrast, Steele defended the practice, describing the meddling as a tool “to try to get to a position where you have the best competitive advantage going into a general election...of trying to put the best players in front of you that you’re going to go up against.” 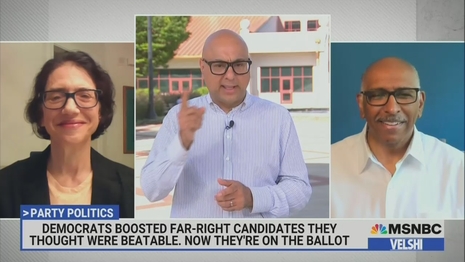 And when Steele described the meddling as an attempt to to get "the best players" as opponents for the Dems, he, of course, actually meant the ostensibly worst, most unelectable, players.

Not only did Steele support the Democrats' intervention in the Republican primary, but he was also less-than-truthful in describing their efforts. Steele twice claimed that the Democrats had run “positive” ads for Gibbs.

In fact, as you’ll see here, the very theme of the Democrat ad was to denounce Gibbs as “too conservative,” and too closely tied to Trump. Yet, in the general election, the Democrats could run the very same ad as an attack on Gibbs. To describe the ad as “positive” was a bit of false advertising by Steele himself.

In the following MSNBC hour, during Tiffany Cross’s show, Democrat pollster and operative Fernand Amandi also denounced the Democrat meddling, saying it could backfire, leading to the election of “fascists” — his term for Republicans.

Ironically, a major Democrat talking point has been that “democracy is on the ballot,” in which Republicans are cast as a threat to America.

Yet neither Rubin nor Amandi, while criticizing the Dem primary meddling — not to mention Steele, who outright supported it — ever considered the ethics of the practice. To them, the only reason to reject meddling was that, on patently political grounds, it could have a counterproductive effect, leading to the election of conservative Republicans.

They never broached the issue that meddling in another party’s primaries is an attempt to fraudulently manipulate American voters. Talk about “democracy on the ballot!”

Steele defending the Democrat practice of meddling in Republican primaries in an effort to elect what they perceive to be the weaker general-election candidate, was sponsored in part by Dell, Intel, Dr. Scholl’s , and GoDaddy. Their contact information is linked.

What do you think of that? That’s some strategic voting that could work for Democrats, or could it go really wrong, could get another election denier elected to Congress.

JENNIFER RUBIN: Yeah, I think it’s a very dangerous tactic. And I would absolutely condemn, if they were doing that in a gubernatorial, a secretary of state, or an attorney general spot, for the reasons we just talked about.

You cannot put election deniers in charge of elections, and you cannot risk that one of these people who you say will never win. I think we went down the road with Trump on that one, will somehow be defeated in the general election.

As far as the congressional seats go, again, you have to be really, really careful that you’re not adding to that body of crazy in the House of Representatives.

RUBIN: It was nice that [Meijer] voted for impeachment. That's great, but until these people foreswear the party itself -- until they say, "I'm not going to put a person like Kevin McCarthy, who is completely loyal to Donald Trump, in a person of authority -- I think that's fair game and I don't think Republicans should be voting for "good Republicans" if those "good Republicans" are going to turn around and empower those MAGA forces.

VELSHI: Now, Michael Steele, I heard from my fantastic team, who loves working with you, that you might have a different opinion on this. You think it’s fair game, if, if, if Democrats think they can get somebody in who they can defeat, maybe they should try it?

MICHAEL STEELE: Yeah. I mean, look, I’m a former county, state, and national chairman. That’s what I do. I do -- we have strategies. You know, we employ them. And this is something that has been employed in the past by both Democrats and Republicans. And I'll put it to you this way. You know, people sit back and, you know they don't seem to have a problem with negative ads in a general election, against an opponent. But now we’re concerned about a party putting out positive ads, about your opponent in a primary?

So, you know, it's -- you know, I hear what people are saying. And yes, there is a risk with every strategy you do in politics. There's just absolutely a risk with that. But I can tell you, we had some success with this in 2010. I had some success with it here in -- in Prince George's County in the state of Maryland. And so, sometimes it works out that it all lines up for you.

And it's just one more effort that parties have in there available to them, to try to get to a position where you have the compet -- best competitive advantage going into a general election. So, I just find it a little bit funny that people are slamming the Dems for running positive ads about these MAGA Republicans. Yeah, they’re gonna turn around in November and say, don’t vote for that crazy: of course they are! But that’s just part of the -- the nature of trying to put the best players in front of you that you’re going to go up against.