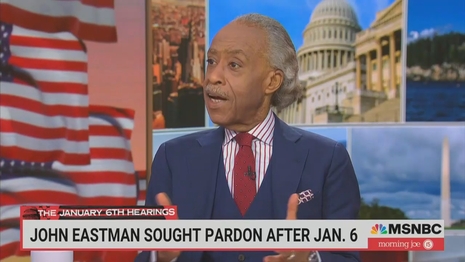 Liberal street cred must be preserved.

And so it was on today's Morning Joe that in the course of just 90 seconds, Al Sharpton three times put on the record his fundamental disagreement with Mike Pence. At one point, Sharpton even boasted, "no one has been more critical of Mike Pence than I have."

But, having ensured that no one would think he was going soft on conservatism, Sharpton went on to praise Pence for his actions on January 6, 2021. Saying that Pence deserves "respect" and "credit," Sharpton lauded Pence as "absolutely heroic" for declining President Trump's demand that he refuse to certify the results of the presidential election, and for remaining in the Capitol despite its breach by rioters, including some who were chanting, "hang Mike Pence."

We wouldn't go breaking out the "Pence-Sharpton '24" banners anytime soon. Not so long ago, it was Sharpton who was causing the riots in New York City. But we'll definitely file this one under our NewsBusters rubric of "Sudden Respect" -- for instances of liberals giving credit to a conservative for doing something they approve of!

Joe Scarborough sounded a note similar to Sharpton's, saying that on January 6th, Pence, along with Nancy Pelosi and Mitch McConnell, "stood in the gap and protected and defended democracy. And you know what? We should be able to sit back and look at that and say, job well done."

On Thursday night, MSNBC host Lawrence O'Donnell offered an opposing take on Pence: "I wish he was steely and determined on December 6th, when he could've said the vice-president has no choice. And so, this drama, this tragedy, it was so much a product of Mike Pence's deliberate cowardly silence for one full month, never telling the country, ever, that the vice president had no choice."

AL SHARPTON: Now I think there comes moments when we step past our agreements, disagreements, partisan or whatever they may be, and have to take a stand for what we really believe in. And what I think we saw that day,

And no one has been more critical of Mike Pence than I have, and still do disagree with him on nine out of ten things. But he chose the country over his own life! I mean, this guy -- imagine you're in a building, seeing these kind of mobs coming through wanting to kill you, and your boss, you're hearing by phone, is instigating them, and he still chose to do the right thing for the country.

JOE SCARBOROUGH: And stay there, when he could have very easily escaped and been safe.

SHARPTON: Easily escaped. He had Secret Service, all kinds of security that could have gotten him out on any number of routes. And he stood there which, in many ways kept the country from falling into whatever it could have fell into.

So at that moment, I've got to give a lot of respect to Mike Pence. Now, we're going to fight on everything else --

Who knows how that would have ended up with that violent mob and people around the country that were prone to duplicate that violence in different states that were questionable? So, by me looking at the possibilities of what could have happened had he not stood up, I have to give respect to him.