The January 6 committee is Captain Ahab. And Donald Trump is its Moby Dick.

These hearings are ultimately about the committee's quest to prove Trump's criminal responsibility for the events of that day. They are seeking to satisfy the political blood lust of liberals like MSNBC's Tiffany Cross, who, as we've noted, described her lurid Trump fantasy this way:

"You play the music to the TV show Cops, and march this guy out, and put him in the back of a police car, and hold his head, and everything." 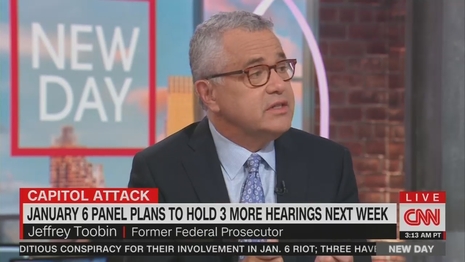 Appearing on this morning's New Day, Toobin said that the committee established two goals. First, to prove that Trump and those around him knew that he had lost, but still persisted in their attempt to overturn the results of the election.  Second, to prove that Trump "encouraged" or was "responsible" for the violence of that day.

Toobin opined that the hearing had been successful on the first count. But it is upon the second count, that of encouraging or being responsible for the violence, that any possibility of a criminal prosecution would hinge. And there, Toobin acknowledged that the committee's case had been weaker:

"That's going to be -- that we saw less proof of. But I think the president's responsibility for the violence is going to be the biggest challenge so far."

Toobin tried to sugarcoat his pessimistic view, saying that the committee made a "promising start" on proving Trump's responsibility, but then backtracked, admitting: "they made a more promising start in proving that the president and his people knew that he lost."

If the committee ultimately fails to make a convincing case on Trump's responsibility for the violence of January 6th, the hearings will have been a flop, and the Democrats will, politically speaking, suffer the same fate as poor Captain Ahab.

CNN's Jeffrey Toobin admitting on New Day that the January 6 committee hearing was facing its "biggest challenge" in proving that Donald Trump was responsible for the violence of that day was sponsored in part by Verizon, Dell, Intel, Applebee's, and SoFi.

JEFFREY TOOBIN: I would say two things is the main -- is the main goal here. One is showing that the president and everyone around him knew that he lost. That this was not an attempt to find the true result of the election. This was an attempt to overturn a result that they all knew had taken place.