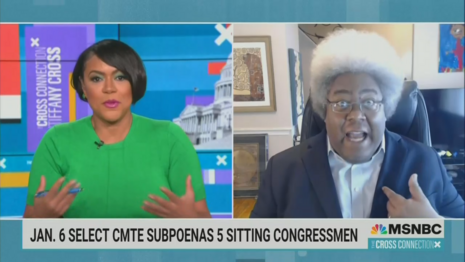 MSNBC host Tiffany Cross has a long-running fantasy about President Trump being forcibly accosted in various manners. It began back in 2020, when we noted Cross dreaming about Trump being:

"Dragged out on the White House lawn like a 1980s episode of Cops."

Cross was back at it last month, when she fantasized Trump being roughly arrested:

"You play the music to the TV show, Cops, and march this guy out, and put him in the back of a police car, and hold his head, and everything? It will be a ratings bonanza, believe me."

On her show this morning, regular guest Elie Mystal got in Cross's "book 'em, Danno," spirit. When Cross asked Mystal what should be done to force Republican congressmen to comply with subpoenas issued by the January 6th committee, he responded:

"I've always been a fan of Nancy Pelosi's basement, or vanity parlor, or whatever she has there in Congress, because Congress has an inherent contempt power. They, on their own authority, can issue legal subpoenas and force people to comply with subpoenas, and arrest people who don't comply with legally-issued subpoenas from Congress."

As to just how physical things could get, Mystal suggested that the sergeant-at-arms would be entitled to "fight" with the congressmen, and Mystal imagined the sergeant-at-arms "physically absconding" with the Republicans. Mystal acknowledged that the Democrats might be afraid to do so, but he insisted, "this is their power that they have, that they can execute under their own authority."

Cross jumped in, suggesting that things would get physical if she or Mystal defied a subpoena. Mystal agreed, saying law enforcement "would be coming through my window right now, to come get me."

Cross & Co. apparently feel entitled to indulge these fantasies of harsh physical treatment of their political opponents. Imagine the horrified reactions if the tables were turned!

Note: Mystal expressed little faith in the other option to force compliance with the subpoenas: giving Biden AG Merrick Garland "smelling salts," and hoping he will go after the Republicas. And Mystal saying that "the truth is out there" was an X-Files allusion to a segment coming later in the show about a congressional hearing on UFOs.

On Tiffany Cross's show, regular guest Elie Mystal suggesting that Republican Members of Congress who have not responded to subpoenas from the January 6th committee should be "physically absconded" to Nancy Pelosi's basement was sponsored in part by Chevron, Dell, Intel, Johnson & Johnson, maker of Neutrogena, GlaxoSmithKline, maker of Parodontax, and Volvo.

TIFFANY CROSS: There's a group of five congressmen who all ridiculous responses to these subpoenas. So, my question for you is, legally, how can this committee force the five Republicans to adhere to these subpoenas?

ELIE MYSTAL: Yeah, look: the truth is out there, but these Republicans don't want people to know about it.

How can the committee force them to do stuff? Well, there are a couple of options, right? One that I've always been a fan of is Nancy Pelosi's basement, or vanity parlor, or whatever she has there in Congress, because Congress has an inherent contempt power. They, on their own authority, can issue legal subpoenas and force people to comply with subpoenas, and arrest people who don't comply with legally-issued subpoenas from Congress. They can do that on their own authority.

That hasn't been tried in quite some time; I'm not going to lie about that. It's been a while since we brought congressional inherent contempt power. There's a question of, like, how physical do you want this to look? Like, can the sergeant-at-arms of Congress fight?

Because, like, we're talking about physically, you know, absconding with Members of Congress for noncompliance with subpoena. So, there're some reasons why the Democrats might be afraid of using their power. But this is their power that they have, that they can execute under their own authority if these five congresspeople continue to defy lawful subpoenas.

The other option is the one, is the road that we've been down before. They issue contempt citings, refer them to the Department of Justice for contempt. We put it on Merrick Garland's desk, we maybe give Merrick Garland some smelling salts in hopes that he wakes up and reads these referrals. And then we wait to see if the Department of Justice has any intention ever of enforcing congressional subpoenas. We'll see about that.

MYSTAL: Oh, if I defied a subpoena, they would be coming through my window right now, to come get me --

MYSTAL: -- to go respond to the subpoena.

CROSS: Right. Cue the Bad Boys music. It would happen. So, it's very disconcerting to see the privilege of these Members simply dismiss the subpoena.