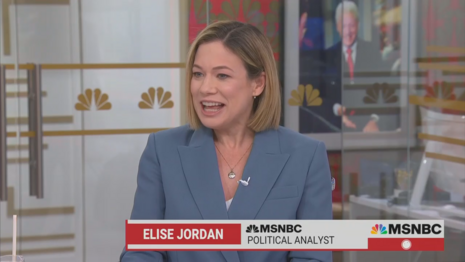 That, in a nutshell, was Morning Joe's typical Democrat Party take today.

"MSNBC Republican" Elise Jordan led the charge, demanding that Biden Attorney General Merrick Garland "get in the game," and  "fight" by charging Republican Members of Congress with contempt for failing to respond to subpoenas from the Democrat-stacked January 6th committee.

This underlines that (a) the Democrats stacked the January 6  as a way to defeat Republicans in the midterms and in 2024 and (b) the Democrats expect their Attorney General to be a partisan player, not some horribly independent "judge" type when they need to win.

The partisanship boiled over when Jordan declared that all this January 6 campaigning would be "legitimate," while any Republican attempt to reverse the "accountability" machine next year would be just terrible!

Mike Barnicle declared that if Republicans win back the House majority in January, they will establish "a special committee on revenge."

Jonathan Lemire warned that if Republicans are in charge, "they're going to investigate—get ready for the words "Hunter Biden." Lemire bemoaned that "the people's business" won't get done.

But why would investigating Hunter Biden constitute "revenge," or not be "legitimate?" Ultimately, such investigations would not focus on Hunter himself, but rather on whether he was funneling ill-gotten gains to "The Big Guy!"

Note: Jonathan Lemire cemented his standing as the Democrat whisperer. He channeled Democrat thinking that if Republicans were to use their new majority to launch investigations, "the American people would get frustrated at them, and may provide President Biden with a foil for those second two years and his re-election."

Morning Joe's dialogue on GOP "revenge" was sponsored in part by Walgreens and Liberty Mutual.

We also know that, right now, Attorney General Merrick Garland is sitting on some other important referrals, including the contempt referral of Mark Meadows, Peter Navarro, and Dan Scavino. That's been lingering some time now.

So, if the House ultimately does make these referrals, Merrick Garland has almost got a dozen decisions that he's got to make on his plate, a lot of them extremely politically loaded.

MIKE BARNICLE: This almost guarantees that if the Republicans gain control of the House on January 2nd, next year, they will institute a special committee on revenge. And nothing will get done next year in Congress, as nothing much has gotten done this year.

WILLIE GEIST: And they've already said as much, Jon, haven't they? Okay. You want to play it this way? Then you're all getting subpoenaed in January when we take the House.

JONATHAN LEMIRE: And it's about January 6th. It also dates back to some of the investigations that the Democrat-controlled House did during the Trump administration. The Republicans have made clear that they're going to do the same. They're already talking about impeachment proceedings for certain cabinet members.

They're going to investigate: get used, get ready for the words "Hunter Biden." Like, there's going to be all sorts of probes, at least. Like, this is what they're going to do. And the people's business isn't going to get done.

Democrats, though, the silver lining for them, they think that if the House was to go to Republicans [sic] and they were to launch all these investigations, the American people would get frustrated at them, and may provide President Biden with a foil for those second two years and his re-election.

ELISE JORDAN: I mean, come on. That would be -- that is what the president says? I -- this is ridiculous.

What is Merrick Garland waiting on? Come on, get in the game: fight! Fight! He's just going to be on the other end of power, the losing end. And then, Republicans, you think they're going to sit back and be like, oh, we're not get much legislating done because we'd look really political if we did all these investigations?

This is legitimate. There's subpoenas out there. The fact that sitting Members of Congress don't care enough to reply and to actually go and report and speak, the way that you and I are petrified to not go to jury duty, is ridiculous. They need to get on with the business of the day.