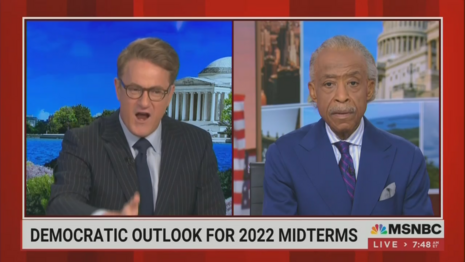 Joe Scarborough once again put on his Democrat-consultant cap, passionately advising "white, woke leaders in DC" that they need to tone down their wokeism because it's costing them votes among people of color.

On Monday's Morning Joe, a panicky Scarborough scolded those white wokesters, telling them that black, Hispanic, and Asian voters are more conservative than they are on issues like crime and education.

This came after a video clip was played of Terrance Woodbury, a black pollster, saying that to win in 2022, Democrats need to get Obama-level support among black voters, whereas he's seeing approval numbers in the low-70s. He gave this grim assessment:

"Any Democrat running statewide in 2022, that has 73% of the black vote, has lost. Full stop. There is no path to victory."

In response, Scarborough went on his diatribe against those "white, woke," DC Democrats, saying their approach is not only losing "white dudes in the Upper Midwest," but also "people of color." Scarborough ended his spiel by yelling at the wokesters: "Get. Off. Of. Twitter!"

Al Sharpton seconded Scarborough's view: "they're losing the people of color because they don't really get the people of color's life. If you live in a neighborhood that is inundated with crime, and you act like that is not an issue, you've already lost me."

Note: Scarborough went out of his way to retain his liberal street cred. So, while telling wokesters to cool their jets, he also said it was fine for them to push favorite left-wing issues like "getting rid of the Trump tax cuts," and even, incredibly, "making sure that the richest 1% don't keep moving forward." Perhaps realizing that he was sounding like Bernie Sanders on steroids, Scarborough modified that last suggestion by adding, "you know, paying zero in taxes!

On Morning Joe, lectures about how Democrats are bungling their appeals to minority voters were sponsored in part by AT&T.

MIKA BRZEZINSKI: Here's another clip from 'The Circus.' Take a look.

MARK MCKINNON: What's your outlook for the midterms and what do Democrats have to do to overcome all the challenges?

TERRANCE WOODBURY: When you look at a place like Georgia, a place like Florida where there's very likely going to be a person of color to be at the top of the ticket, they have to reach Obama-level support amongst black voters. And so, when we start to see that approval rating drop to 73, 72% amongst black voters, I can tell you right now: Any Democrat running statewide in 2022, that has 73% of the black vote, has lost.

WOODBURY: Full stop. There is no path to victory.

JOE SCARBOROUGH: Rev, I want to talk to you about a real blind spot that a lot of Democrats in the Beltway, in DC, have that you don't, and you've been warning about.

AL SHARPTON: They're losing people of color because they really don't get the people of color's life. If you are living in a city, in a neighborhood, that is inundated with crime, and you act like that is not an issue you have already lost me.