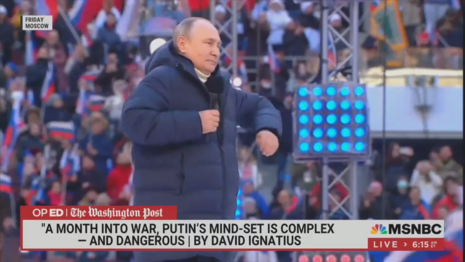 Call it the Afghan Hound that didn't bark.

On Thursday's Morning Joe, Joe Scarborough argued that, based on western weakness in prior Russia invasions, dictator Vladimir Putin thus determined he had a "good reason" to invade Ukraine.

Scarborough wasn't saying that Putin was justified in invading. He meant that Putin is a "strongman" who likes to prey on the weak, and therefore thought he could invade Ukraine with impunity given recent history.

In support of his, Scarborough cited the meekness of the West when Russia went into Georgia, Crimea, and Syria. But there was a glaring — and much more recent — example of American weakness that Scarborough failed to mention: Biden's fiasco of a catastrophe of a disaster of his withdrawal from Afghanistan.

Biden even went so far as to notify the Taliban of a firm date by which all US troops would be withdrawn — thoughtfully giving them vital intel for purposes of planning their attacks. And Ol' Joe totally miscalculated the speed of the Taliban takeover. Biden estimated it would take months. In fact, it took mere days.

So, how could any self-respecting "journalist" or commentator neglect to mention Biden's Afghan fiasco as an important factor in Putin's calculus? The answer is simple: Scarborough was not self-respecting. He's gone from self-described "conservative" to all-in Biden sycophant. Sad!

More broadly, Scarborough failed to mention another glaring example of Biden's weakness in his January statement that a "minor incursion" by Putin into Ukraine wouldn't result in a full-blown U.S. response. At the time, we noted that Scarborough actually analogized Biden to Neville Chamberlain's appeasement of Hitler, and said it could invite Xi to invade Taiwan. But all that's apparently been scrubbed from the Scarborough's memory bank!

On Morning Joe, Joe Scarborough omitting Biden's catastrophic withdrawal from Afghanistan was brought to you in part by AT&T and DirecTV.  Their contact information is linked.

JOE SCARBOROUGH: He is a strongman. He -- he loves his image as a strongman. And he loves preying on weakness.  And he has seen America and the West as weak for good reason. We didn't respond the way we should have responded in Georgia in 2008, in Ukraine in 2014 [BRZEZINSKI SIGHS] and in Syria in 2015, when war crimes were being committed before.  And so, this is a guy who -- who has thought he could go in, once again into Ukraine, and the western world would let him take whatever he wanted. Well, the western world has stood up, and actually, again, as [Madeleine] Albright and so many others predicted, it's become his worst, worst nightmare. I mean, we're talking about NATO troops now doubling along the border on the eastern-most border of the NATO frontier. The question is: How does he respond to this now that he's cornered?