Talk about having a potty mouth!

With Joe Scarborough leading the [dis]charge, the Morning Joe crew mentioned "toilets" 14 times in its opening minutes Friday. The liberal media never stop bombing the former president with whatever sordid details it can glean from Trump insiders.

We've talked before about Scarborough getting on his hobbyhorse and riding a favorite phrase into the ground. But this morning, it's more apt to describe Scarborough mounting his . . . commode.

Morning Joe was, of course, making the most of New York Times reporter Maggie Haberman's report, in an excerpt from her coming book about Trump, that the former president flushed documents down the White House toilets, at times clogging them. 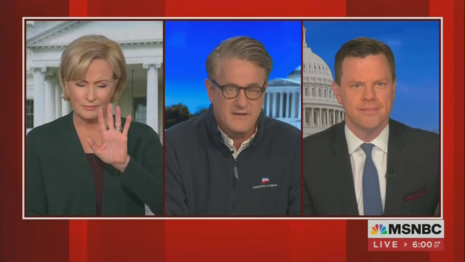 Mika Brzezinski feigned dismay at her husband's endless mention of toilets [see screencap], despite being the first on Friday's show to trot out the T-word.

Even the normally staid David Ignatius of the Washington Post embraced the scatological zeitgeist, mentioning "a classified toilet joke" himself.

Note: in addition to the Morning Joe crew's 14 mentions of toilets, the show also aired in the first six minutes a mash-up of Trump mentioning toilets six times.

PS: Back in 2014 -- four years before they were married -- Morning Joe made a parody video of their morning routine that included a toilet joke: "When Mika calls and Joe sees her photo on his smart phone, he hurls it too, but this time into the toilet. Other cell phones marinating there indicate that she bothers him daily."

MIKA BRZEZINSKI: All of the other reports, like putting them in the toilet

WILLIE GEIST: Yeah, the phone call on the toilet, just as a general matter, it'ss really offensive . . . A couple of years ago, when he was complaining about toilets, and the water flow. And he said, some of these toilets, you have to flush 10 or 15 times before it all goes down.

SCARBOROUGH:  He has classified papers that he took to Mar-a-Lago that, you know, probably reading on the toilet . . . Mika, because, I know, you want to keep talking about this Trump toilet obsession . . . Yeah, there's always this weird obsession with mosquitoes, and toilets.

MIKA: I think we can put the toilet talk aside.

DAVID IGNATIUS: We're going to read a classified toilet joke: don't you get it?

MIKA: Oh my God! David Ignatius, please do not add to this! Do not goad him. Okay, I'm moving on to the news of the day. But that is funny, I was seeing on twitter, like golden toilets—people were having fun with it.