Many, including some prominent Democrats, have criticized Joe Biden's inflammatory speech this past week in Atlanta in which he accused those who oppose undoing the Senate's filibuster rules to push through his federal takeover of elections as being on the side of George Wallace, Bull Connor, and Jefferson Davis. So it's no surprise that MNSBC hosts Jonathan Capehart and Al Sharpton piled on.

And Peggy Noonan, no right-wing flamethrower, condemned Biden's speech as "a disaster for him" that was "aggressive, intemperate, not only offensive but meant to offend."

But Biden, even at his most outrageous, can always count on MSNBC to have his back. Thus it was that on Capehart's MSNBC show on Sunday morning, both he and Sharpton expressed their support for Biden's despicable "whose side are you on" dichotomy. Sandwiched between their expressions of support, Capehart had on a Democrat congresswoman who also declared her approval.

There was some unintentional humor, courtesy the Rev. He attempted a laughable distinction without a difference, saying: 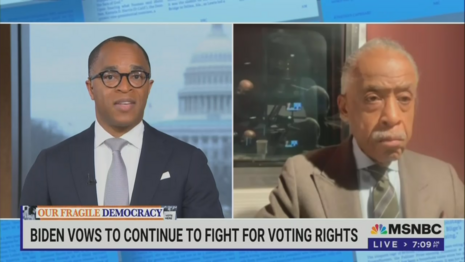 Gee, thanks for the clarification, Al!

Otherwise, we would have assumed Biden was saying that the Wallace/Connor/Davis trio had been reincarnated in the bodies of Kyrsten Sinema and Joe Manchin!

MSNBC backing Biden's outrageous Atlanta speech in which he said that people opposed to undoing the filibuster to permit the federal takeover of elections are on the side of George Wallace, Bull Connor, and Jefferson Davis, was sponsored in part by T-Mobile, Downy, and Allstate.

JONATHAN CAPEHART: With voting rights on the line, President Biden laid out in stark words the choice facing the Senate in a fiery speech in Atlanta.

CAPEHART: Within days, we got an answer. Democratic senators Kyrsten Sinema and Joe Manchin, members of the president's own party, reiterated their unwillingness to carve out an exception in the filibuster to allow for a simple majority vote on the Freedom to Vote Act or the John Lewis Voting Rights Advancement Act.

Joining me now is co-chair of the Congressional Voting Rights Caucus, Congresswoman Terri Sewell, whose Alabama district holds Montgomery, Birmingham, and Selma. Thank you very much for coming

You know, Congresswoman Sewell, in the intro we played what to my mind was the pivotal moment in the president's speech, where he laid down the marker, you're either with John Lewis or you're with Bull Connor. It was stark language. And a lot of people were not happy with that. I would love to -- Democrats and Republicans -- thought, some, thought he went too far. To your mind, did the president go too far in laying out that stark language?

It's why I think the president was right when he said are you on Dr. King's side or George Wallace side, or Bull Connor side or John Lewis side, Abe Lincoln side or Jefferson Davis?